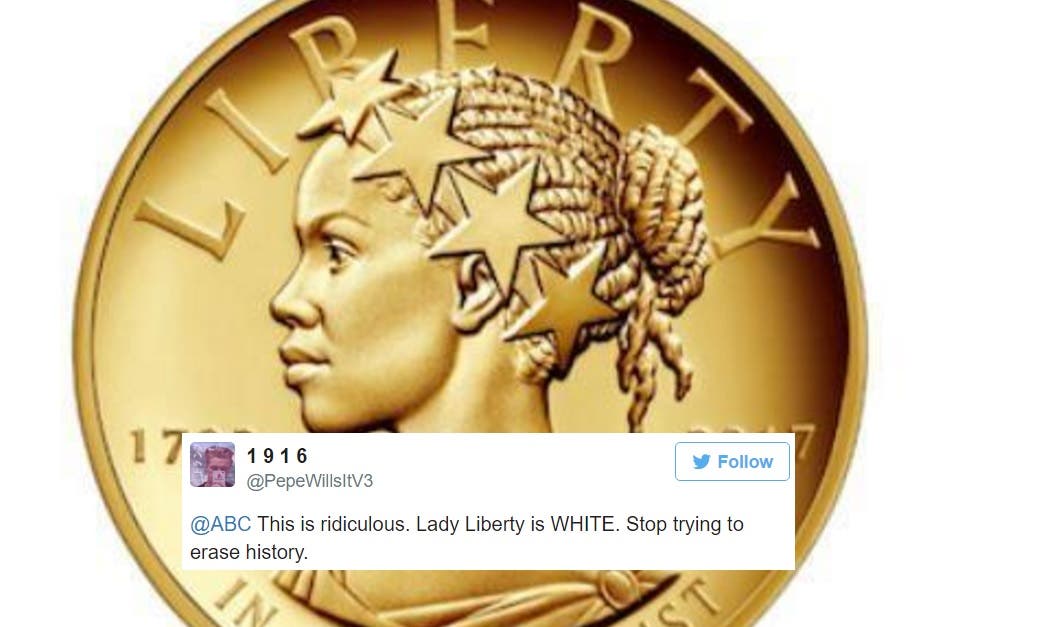 Even Insurance Companies Are Terrified Over The Repeal Of Obamacare

The US Mint and Treasury unveiled a special $100 collector’s gold coin today that features Lady Liberty depicted as a woman with Afro-American features. Predictably, Trump supporters and racists and bigots took to Twitter for a self-pity party as you can see below.

Predictably, Trump supporters and racists and bigots took toTtwitter to celebrate their white, European heritages by trashing the coin and generally like the symbol of Lady Liberty, which is an artistic representation. Echoing their complaints about how Santa Claus (fictional) is white, it makes for an epic self-pity party:

What is wrong with you people? Going back into history & coloring it up makes you feel better? It doesn't change anything.

Is it going to be worth three fifths as much as other coins?

Can they be bought wif a EBT?

This bigoted supporter struck at the heart of the conservative’s dilemma when trying to viciously slam something so obviously innocuous as a commemorative coin by calling it “fake symbolism.” It’s part of the Trump-led plan to call everything “fake” all of the time, excepting for one’s own personal viewpoints.

Ironically, this little Pepe went to Twitter to say that Lady Liberty is “WHITE” for a gold-colored coin, citing “history.”

Predictably, there was also a rich vein of President Obama’s critics acting like making a commemorative coin was his idea of a personal insult to all white persons. Here is a bitter taste of the classic white grievance to which we’ve become most (sadly) accustomed to hearing from Trump supporters during their march against tolerance in the past year.

According to the USA Today, the rest of the series of numismatic releases will include coins featuring an Asian-American, Indian-American, and a Hispanic-American woman all as Lady Liberty, with more details forthcoming on April 6th which is the actual release date for this coin.

Here’s the new Lady Liberty coin, and by now it’s obvious why she is wearing such a withering look of concern in her debut on the high-relief coin: