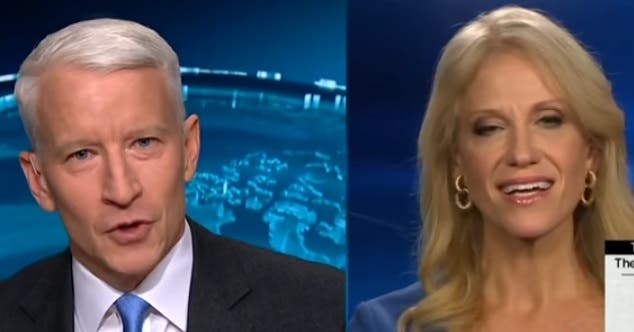 The wheels are falling off of President-elect Donald Trump’s propaganda wagon, and it is a glorious sight to behold. The recent revelations that Trump was in collusion with the Russian government have sparked a firestorm of criticism, with further revelations continuing to come down the pipe. It has now been learned Trump was made aware of this situation by U.S. intelligence officials before it became public knowledge. Trump’s team of advisers been doing their best to deny this, but more evidence has risen to show they have been lying through their teeth.

CNN originally broke the story about Trump being briefed on the now infamous Trump Dossier, which contains allegations that Trump engaged in perverted sexual acts for which he is being blackmailed by the Russian government. Trump’s former campaign manager and now  propaganda chief Kellyanne Conway made her rounds on various television programs, where she tried to insist that Trump was never briefed on the documents. Conway claimed CNN was outright lying by alleging that Trump had been briefed by intelligence officials:

I can hold CNN accountable for having the screaming headline that he was briefed on something if he wasn’t. That’s what it says. It says intelligence chiefs presented Trump with information Russia efforts to compromise him.

Watch and review Conway’s statements below:

Now here is where the fun begins. It has been confirmed by NBC that the FBI’s director, James Comey, personally briefed Trump despite Trump’s team’s denials to the contrary. Conway says this never happened, attempting to refute reality by repeating lies over and over again.

Furthermore, on “The Last Word with Lawrence O’Donnell,” O’Donnell called NBC’s report a “direct smack-down of Kellyanne Conway and what she has been saying this week.” He also said, “Multiple high-level intelligence sources have decided they are tired of Donald Trump or Kellyanne Conway lying about them. They are not going to take it anymore.”

For over a year Trump’s strategy of asserting information which was not true to be a fact has worked well for him as he bamboozled the public into supporting his candidacy. It appears now, however, that Trump and his team will no longer be given carte blanche to say or do whatever they like without being held accountable. It is about time.