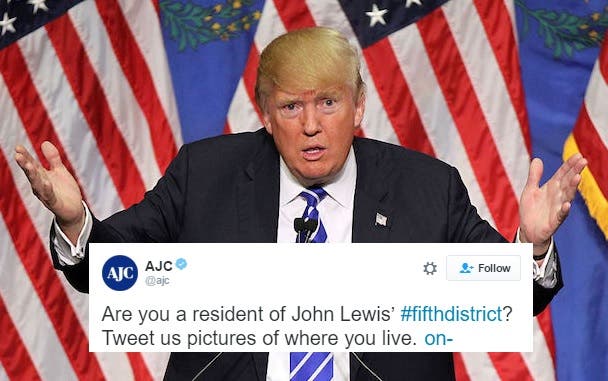 Civil rights hero Rep. John Lewis (D-GA) triggered a firestorm when he correctly labeled Donald Trump an “illegitimate president” due to the Russian hacking of Democratic Party servers and the email accounts of Democratic nominee Hillary Clinton’s campaign officials. “I think the Russians participated in helping this man get elected. And they helped destroy the candidacy of Hillary Clinton” said Lewis, whose assessment has been confirmed by Trump himself.

President-elect Donald Trump responded the way he always does – with a petulant and childish Twitter rant:

He couldn’t have been further from the truth. Rep. Lewis’s Fifth District is a majority-black district where 88% of adults have high school diplomas and 44% have college degrees. The citizens of the Fifth District were none too pleased to have Trump try to smear their community with his dystopian descriptions of African-American neighborhoods.

The Atlanta Journal-Constitution asked Fifth District residents to send them pictures of what Lewis’ district really looks like – and the results speak for themselves:

Here we are in the #fifthdistrict where things are "falling apart" and in "horrible shape" @realDonaldTrump pic.twitter.com/EJGzN7kfqz

Grateful for another wonderful day in the #fifthdistrict . Thank you @repjohnlewis for your service to our district and nation. pic.twitter.com/mriu5CuvpC

The horrible #fifthdistrict on a Saturday where all these familes are having fun. #defendthefifth @PonceCityMarket pic.twitter.com/BZHFOsf9wI

Took this picture in the #fifthdistrict. I think @EmoryUniversity is trying to tell you something, @realDonaldTrump pic.twitter.com/HkXoXH267e

Welcome to the #fifthdistrict of #ATL where we're #toobusytohate & stand with @repjohnlewis. A wonderful place to live, work, & play! @ajc pic.twitter.com/3iki7q4wuO

Lewis's district is tweeting out #fifthdistrict to show its beauty. We use to live in Atlanta so here's my wife & friend at MLK's gravesite pic.twitter.com/IVlnJSTitJ

The Atlanta Journal-Constitution also found another reason why Trump was so angry at the Fifth:

Donald Trump’s cheap shots at a civil rights hero on the weekend of Martin Luther King Day just goes to show how little he truly cares for the citizens of this country. His accusations of Lewis’ district being “terrible” and “run-down” and “crime-infested” are just shallow attempts to perpetuate racist stereotypes about African-American communities – and by extension, the ability of black leaders to care for their communities. These pictures should set the record straight.