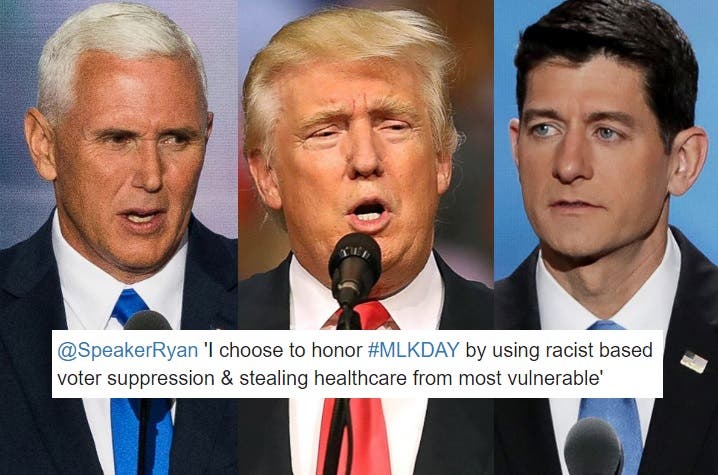 Republicans across the board have been hypocritically wishing everybody a “happy MLK Day.” President-elect Donald Trump’s staffers appear to have seized his cellphone for Martin Luther Day and tweeted out a bland and extraordinarily vague appeal to “celebrate” Martin Luther King Jr and all the “many wonderful things he stood for,” without bothering to mention what any of them were or acknowledge that the kind of hatred embraced by Trump and his white supremacist supporters would eventually kill Martin Luther King.

Speaker Paul Ryan (R-WI) and Mike Pence echoed his half-hearted effort to pretend they care about civil liberties and legacy of Martin Luther King. The denizens of Twitter saw through the outrageous hypocrisy immediately and began to publicly call them out for their insincerity.

"and yet, I'm willing to tolerate racists and neo-Nazis in the White House as long as I get what I want."

While it's easy for politicians to say nice things about Dr. King, at the same time they are suppressing the vote. #MLKDAY

"I have a scheme."
– Donald Trump, his entire life.#MLKDAY

By endorsing, as you did, the presidential candidate whose words were, as you said, "the very definition of racism"?

The people your party panders to killed him. Now almost 50 years later, those suckers are still a cancer in American society.

hi @SpeakerRyan what is your favourite #MLK quote I like this one: pic.twitter.com/MShPdZqtJV

Donald Trump’s recent attacks on Rep. John Lewis, who rightfully labelled Trump’s electoral college victory as “illegitimate” due to the Russian hacking campaign and the possibility that Trump may be being blackmailed by the Russian government, show that Trump has no respect for the Civil Rights movement.

Trump is incapable of speaking about black Americans without resorting to vile and demeaning racial stereotypes;  he has an obsessive need to victim-blame black Americans for “inner-city” problems – which in itself is just a dog-whistle for “poor minority communities suffering from decades of socioeconomic disenfranchisement and flooded with weapons from lax Republican gun laws.”

Trump blindly supports police officers and excuses their violent excesses and he and his father used to specifically discriminate against African-Americans when selling real estate. Trump has never done anything in his life to help people of color. He mocks and insults war heroes, the families of dead war heroes, the disabled, women, and civil rights heroes. ‘

The Republican Party’s refusal to denounce Trump is an endorsement of everything that he says and does, and none of these lying hypocrites should be able to get away with pretending that they care about the rights of minorities, people of color, or the poor.