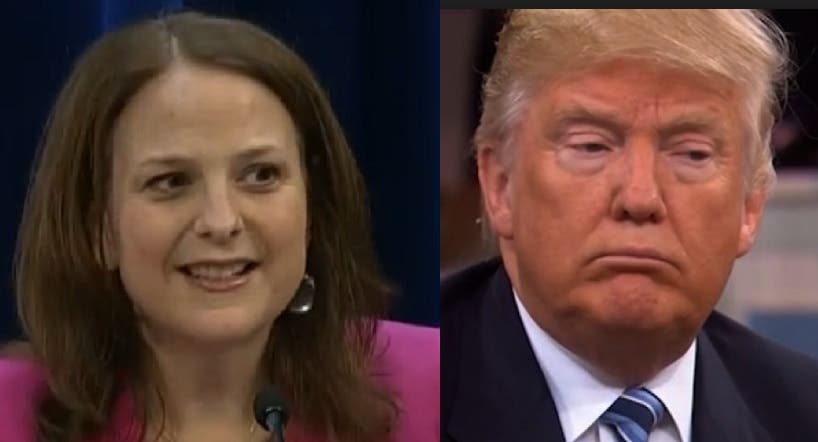 Incoming president Donald Trump is selling out the integrity of American policy in order to give kickbacks to right wing religious extremists. A federal government that recognizes its responsibility to the American public would choose a panel of health advisers who are experts in public health and up to date on the latest medical research. But rather than choose qualified advisers, Trump is giving favors to the religious right who nobly sold out their ‘values’ to vote for him in the 2016 election. He has named Katy Talento as his new health policy adviser, a woman who has deviated numerous times from scientific fact to push a religious agenda.

Most recently Talento has been propagating lies about how to stem the spread the Zika virus, which can cause debilitating birth defects if a woman contracts the virus during pregnancy. The virus is transmitted by mosquito bites and can also be sexually transmitted.

Talento released guidelines on how to stop transmission of Zika that including instructing women to, “sleep with your husband, with you snug under the covers and him on top of the covers, offering himself as human sacrifice to the mosquitos, who will pick the easier target.”

According to Talento, we need to sacrifice men to the mosquitos so that they can contract Zika and then potentially spread it to women because it is a sexually transmitted disease. Zika expert Dr. Nikos Vasilakis of the University of Texas says that this has no basis in fact. He told the press, “I don’t know where she’s getting her data from.”

In the past, Talento has been at the forefront of conservative movements to avoid dealing with the spread of HIV/AIDS and dissuade women from family planning. During the George H.W. Bush Administration conservatives lobbied against government-funded HIV/AIDS research during the epidemics most dire years. In 1992, three years into his term, HIV/AIDS became the number one cause of death for men aged 25-44.

In 2003, Talento took the helm of the anti-research campaign and inexplicably claimed that money to fund HIV/AIDS research was going to fund Russian prostitution. In 2003 the CDC trialed an ineffective HIV vaccine and discovered that 27,000 new infections every year were transmitted by someone who did not know that they were infected.

Talento brushed the crisis to the side and focused her attentions on stripping funding from research projects that, in addition to quelling the spread of HIV/AIDS in America, might also benefit Russian sex workers. She has also championed the demonstrably false claim that contraceptive pills cause abortions. In fact, contraceptive pills ensure that an egg is never fertilized, so there is nothing to possibly abort.

Trump is setting up his Administration to prefer ideology over science and appearances over results. In doing so, he is sacrificing the protection of health research funding and scientifically-informed guidelines that are poised to help an entire generation of Americans.