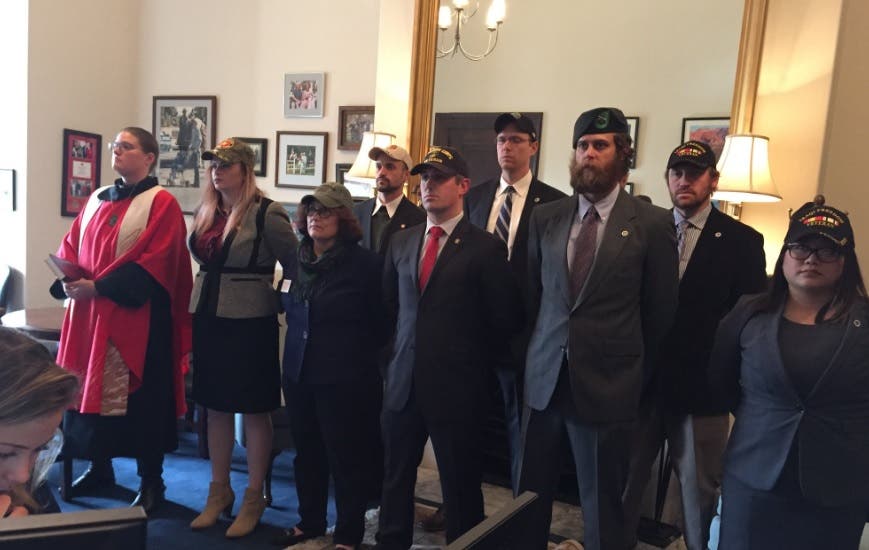 Sen. John McCain has demonstrated to the nation once again that whatever principles he once had have been discarded to gain favor with the Trump Administration.

Veterans from America’s wars in Iraq and Afghanistan occupied his office to demand that he vote “no” on the nomination of Exxon Mobil CEO and Putinist oligarch Rex Tillerson as Secretary of State – and McCain shut his door and called the police on his fellow vets.They are now being arrested.

Appears #VetsRejectRex has shut down @SenJohnMcCain office. Formation is still inside. The door is locked. More security on the way.

Capital police arrest #VetsRejectRex when @SenJohnMcCain failed to meet w formation to demand he votes NO to #RexTillerson as Sec State. pic.twitter.com/thjSdlLbuV

These veterans are all too aware that Rex Tillerson is exceptionally unqualified to manage our nation’s foreign policy – especially when his company stands to make half a trillion dollars in profit if the Obama Administration’s sanctions on the Russian Federation are lifted, as Trump and Tillerson intend to do.

The veterans are extremely worried that as Secretary of State, Tillerson will use the United States armed forces to wage wars for oil and profit, as former vice-president and war criminal Dick Cheney did in Iraq. Halliburton made over $40 billion in profits while American men and women lost their lives and limbs occupying a hostile nation in an invasion so poorly executed that it plunged the entire region into chaos.

“As a former US Army sniper I’m against seeing more of my fellow service members lay their lives down for oil executives” says Garett Reppenhagen on Twitter.

McCain disgraces the nation he has sworn an oath to defend by allowing Trump to appoint men and women who will put their own personal interests above the needs of our nation. For him to call the police on his own fellow veterans is shameful and craven.

Watch a live stream of the occupation here:


Join millions calling for AG Barr to resign after he defied his constitutional obligations in order to protect Trump!