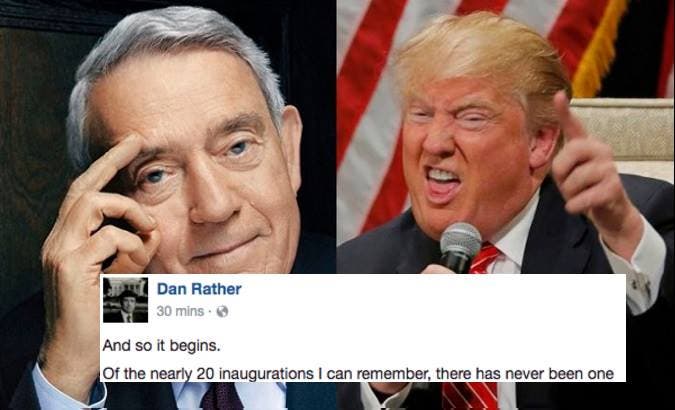 Dan Rather, former CBS Evening News anchor, has released an elegant, tragic statement about the Donald Trump presidential inauguration that occurred today at noon. He sums up the collective anxiety that is gripping the majority of Americans as we enter into the great unknown. Rather elucidates the reasons why the American people are faced with so much uncertainty heading into a presidency, when normally the incoming president is transparent.

And so it begins.

Of the nearly 20 inaugurations I can remember, there has never been one that felt like today. Not even close. Never mind the question of the small size of the crowds, or the boycott by dozens of lawmakers, or even the protest marches slated for tomorrow across the country. Those are plays upon the stage. What is truly unprecedented in my mind is the sheer magnitude of quickening heartbeats in millions of Americans, a majority of our country if the polls are to be believed, that face today buffeted within and without by the simmering ache of dread.

I have never seen my country on an inauguration day so divided, so anxious, so fearful, so uncertain of its course.

I have never seen a transition so divisive with cabinet picks so encumbered by serious questions of qualifications and ethics.

I have never seen the specter of a foreign foe cast such a dark shadow over the workings of our democracy.

I have never seen an incoming president so preoccupied with responding to the understandable vagaries of dissent and seemingly unwilling to contend with the full weight and responsibilities of the most powerful job in the world.

I have never seen such a tangled web of conflicting interests.

Despite the pageantry of unity on display at the Capitol today, there is a piercing sense that we are entering a chapter in our nation’s evolving story unlike one ever yet written. To be sure, there are millions of Donald Trump supporters who are euphoric with their candidate’s rise. Other Trump voters have expressed reservations, having preferred his bluster to his rival’s perceived shortcomings in the last election, but admitting more and more that they are not sure what kind of man they bestowed the keys to the presidency. The rest of America – the majority of voters – would not be – and indeed is not – hesitant in sharing its conclusions on the character and fitness of Donald Trump for the office he now holds.

The hope one hears from even some of Donald Trump’s critics is that this moment might change him. Perhaps, as he stood there on a grey, drab, January day, reciting the solemn oath of office demanded by our Constitution, as he looked out across what Charles Dickens once called the “city of magnificent intentions”, he would somehow grasp the importance of what he was undertaking. Perhaps he would understand that he must be the president of all the United States, in action as well as in word. Perhaps, but there has already been so much past that is prologue.

There is usually much fanfare around inaugural addresses. They are also usually forgotten – with some notable exceptions. I think today will be remembered, not so much for the rhetoric or the turns of phrase but for the man who delivered them and the era they usher us forth.

Mr. Trump’s delivery was staccato and there was very little eye contact as he seemed to be reading carefully from a teleprompter. His words and tone were angry and defiant. He is still in campaign mode and nary a whiff of a unifying spirit. There was little or nothing of uplift – the rhetoric of Washington, Lincoln, Roosevelt, Kennedy, or Reagan. We heard a cavalcade of slogans and one liners, of huge promises to “bring back” an America – whatever that really means to many who look at our history and see progress in our current society.

The speech started with a message of an establishment in Washington earning riches on the back of struggling families across the country. It was an odd note, considering the background of many of his cabinet picks. President Trump painted a very dark picture of the current state of our nation, beset by gangs and drugs and violence, regardless of what the data shows. His words swelled with his economic populism and the nationalism of “America first.” The applause was sparse, and I imagine many more being turned off, even sickened, rather than inspired by what our new President had to say. President Obama looked on with an opaque poker face. One could only imagine what he was thinking.

It bears remembering that one never can predict the arc of a presidency. It is an office that is far too often shaped by circumstance well beyond its occupant’s control. Those challenges, wherever and however they may rise, now will fall on the desk of President Trump. We can only see what will happen. We hope, for the security and sanctity of our Republic, that Mr. Trump will respond to the challenges with circumspection and wisdom. Today’s rhetoric was not reassuring.

Our democracy demands debate and dissent – fierce, sustained, and unflinching when necessary. I sense that tide is rising amongst an opposition eager to toss aside passivity for action. We are already seeing a more emboldened Democratic party than I have witnessed in ages. It is being fueled by a fervent energy bubbling from the grassroots up, rather than the top down.

These are the swirling currents about our ship of state. We now have a new and untested captain. His power is immense, but it is not bestowed from a divinity on high. It is derived, as the saying goes, from the consent of the governed. That means President Trump now works for us – all of us. And if he forgets that, it will be our duty to remind him.

Rather’s final two sentences are a reminder that we need to maintain hope for our great nation’s future and not be beaten down by Trump’s authoritarian rhetoric. Like it or not, Trump is our president and we are not going let him act otherwise.

Marisa Manfredo
Marisa completed her undergraduate degree in 2013 at the University of Wisconsin with a double major in creative writing and media studies. She is an advocate of progressive policies and focuses her interests on gender equality and preventing sexual and domestic violence.
Latest Posts