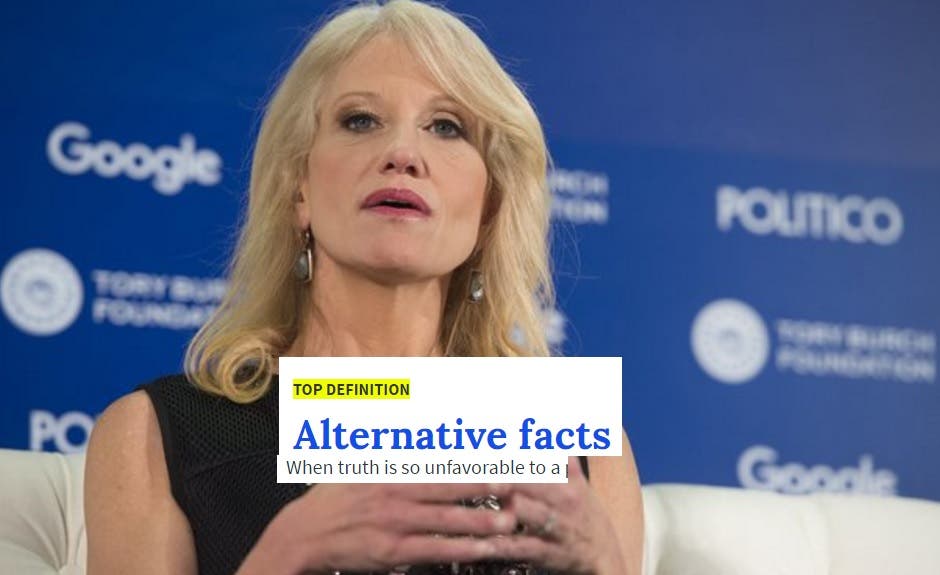 It’s only been two days since the inauguration of Donald Trump as America’s 45th President, and already his Republican team of enablers has had to create an entirely new category of lying to describe their pathological liar leader’s propaganda efforts: “alternative facts.” After Kellyanne Conway tried to redefine intentional dissemination of falsehoods on NBC’s Meet the Press into something wholesome and cool, the Urban Dictionary hysterically defined her “fancy way to say bullshit” alternative facts like this:

When truth is so unfavorable to a pathological liar, that they must invent a whole new category of lies to describe their nakedly intentional acts of deception.

“You’re saying it’s a falsehood and Sean Spicer, our press secretary, gave alternative facts to that.”

“She should resign. That’s absurd. I would assume that she’s just not qualified for the position at this point.” Scott Dworkin, the Senior Advisor to the Democratic Coalition told MSNBC’s AM Joy Show. “It’s going to lead to people dying… Alternative facts? It’s a lie, the bottom line, it’s a lie.”

Dworkin is right; during the Bush Administration, we witnessed first hand the dismissal of facts by a Republican administration with the blind support of two Republican houses of Congress. They led our country on a path of death, destruction, debt and misery. America is a nation built on a Constitutional system of government and people who value intelligence, technology, and the scientific facts, which ultimately become the political facts that our leaders typically use to make sage decisions in the best interests of every citizen.

The pathological lying Trump regime can’t be allowed to remain in power for long, and it’s up to every American to oppose their attacks on truth and fact itself until he is impeached or resigns.

Alternative facts are intentional lies, and when the president lies, someone dies.

.@FUNDER-You cannot say you have "alternative facts." That's going to lead to people dying. People are going to get killed over lies #AMJoy pic.twitter.com/hZh3G0Miea

Author’s Note: I wrote the primary definition of Alternative Facts.