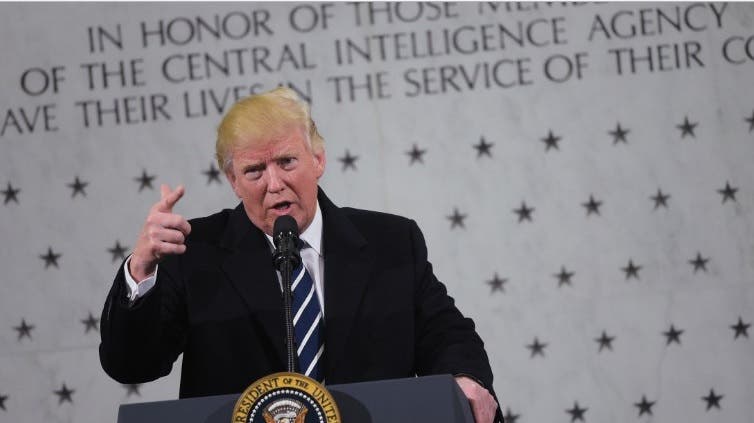 During Donald Trump’s dumpster-fire of a speech to 400 staffers of the Central Intelligence Agency, his remarks were met with cheers and clapping from the attendees. But a closer examination reveals that the vocal and conspicuous support came from paid sycophants and aides who were brought along for just that purpose.

Authorities are also pushing back against the perception that the CIA workforce was cheering for the president. They say the first three rows in front of the president were largely made up of supporters of Mr. Trump’s campaign.

An official with knowledge of the make-up of the crowd says that there were about 40 people who’d been invited by the Trump, Mike Pence and Rep. Mike Pompeo teams. The Trump team expected Rep. Pompeo, R-Kansas, to be sworn in during the event as the next CIA director, but the vote to confirm him was delayed on Friday by Senate  Democrats. Also sitting in the first several rows in front of the president was the CIA’s senior leadership, which was not cheering the remarks.

Coming on the heels of the information that Trump’s own aides have to censor the information they give to Trump lest it “infuriate” him, this is an outrageous development that should horrify the American people. The use of fake crowds and paid supporters is a hallmark of insecure leaders needing constant validation of their own prestige and power – and there is nobody who wears his emotional immaturity and hypersensitive ego on his sleeve as loudly as Trump does.

Trump’s visit to the CIA has, by all accounts, made his relationship with the intelligence community much worse. Trump previously spent the past few weeks attacking our intelligence services, comparing them to “Nazis” and sided with the Russian government against them for their investigations into Trump and his cronies’ possible connections to the Russian government, including possible blackmail.

Despite his promises that he “loves” the intelligence community and supports them “1000%,” many officials were reportedly “stunned and at times offended” by the “uncomfortable” visit, which has made relations “worse” between the White House and the CIA. Turns out Trump’s refusal to take his job seriously isn’t a popular decision among government officials.