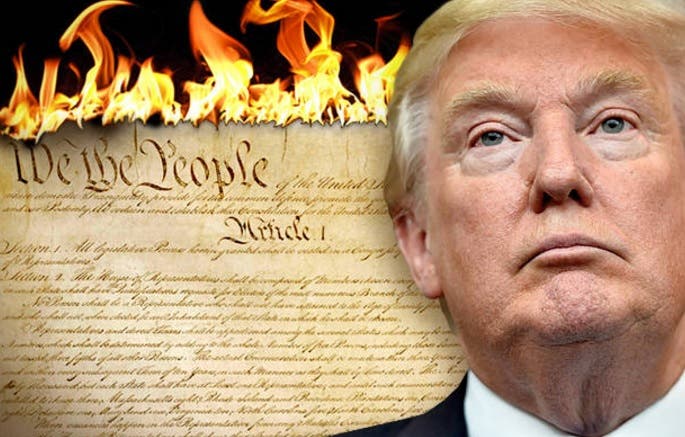 The New York Times reports that an all-star group of constitutional lawyers filed a lawsuit in federal court today against the newly inaugurated President, whose refusal to divest himself from his businesses and continue to accept numerous foreign payments presents a violation of the much-discussed Emoluments Clause of our nation’s governing document. In order to determine what payments the 45th President accepts directly, they’ll need a copy of Donald Trump’s tax returns:

Mr. Eisen said the legal team intended to use the lawsuit to try to get a copy of Mr. Trump’s federal tax returns, which are needed to properly assess what income or other payments or loans Mr. Trump has received from foreign governments.

The legal team filing the lawsuit includes Laurence H. Tribe, a Harvard constitutional scholar; Norman L. Eisen, an Obama administration ethics lawyer; and Erwin Chemerinsky, the dean of the law school at the University of California, Irvine. Among the others are Richard W. Painter, an ethics counsel in the administration of George W. Bush; Mr. Gupta, a Supreme Court litigator who has three cases pending before the court; and Zephyr Teachout, a Fordham University law professor and former congressional candidate who has been studying and writing about the Emoluments Clause for nearly a decade. The plaintiff in the lawsuit is a liberal group known as Citizens for Responsibility and Ethics in Washington. Mr. Eisen now serves as chairman of the organization’s board, and Mr. Painter is vice chairman.

The Emoluments Clause prevents America’s president from accepting any sort of foreign payment, as well as gifts and titles of nobility – a practice which flourished in Europe during the times of our Founding Fathers. The Constitution’s framers believed that foreign payments could cause America’s top elected official to have divided loyalties, inhibiting his oath to defend the nation against all enemies domestic and foreign. The emoluments clause is very broadly defined to cover literally all forms of possible payments whatsoever, including private or public profits, which even prohibits Trump’s press conference dodge, where he announced that he’d donate profit from foreign payments to the federal government without divesting his family’s ownership of the Trump Organization and brand.

Since the election, it’s been discoveredthat Donald Trump may have over 250 businesses registered in Russia and two companies in Cyprus.

According to new research by the Democratic Coalition, the list of places where there are entities registered to the new President’s brand has continued to grow through the election and aftermath to include New Zealand, Saudi Arabia, Thailand and 200+ companies registered in Hong Kong alone, which are active today. By the latest total Trump has opened 32 new companies in 10 countries just since the election, and 61 new companies in eight countries during the campaign (see tweets for sources below). CREW’s press release notes:

Since Trump refused to divest from his businesses, he is now getting cash and favors from foreign governments, through guests and events at his hotels, leases in his buildings, and valuable real estate deals abroad. Trump does business with countries like China, India, Indonesia and the Philippines, and now that he is President, his company’s acceptance of any benefits from the governments of those countries violates the Constitution. When Trump the president sits down to negotiate trade deals with these countries, the American people will have no way of knowing whether he will also be thinking about the profits of Trump the businessman.

“We did not want to get to this point. It was our hope that President Trump would take the necessary steps to avoid violating the Constitution before he took office,” CREW Executive Director Noah Bookbinder said. “He did not. His constitutional violations are immediate and serious, so we were forced to take legal action.”

Hiring the best law firm in Russia to concoct a public spectacle of his sole press conference as the President-elect might have worked for a few days, but it won’t fly for the man sworn in as America’s President.  Donald Trump has evaded all forms of oversight to enter in the Oval Office, but now that he’s a public official he cannot skate by with platitudes, evasion, deflection and outright lies.

It’s very likely that a federal judge will at some point in the near-term future force Donald Trump to hand over his tax returns, whether from this lawsuit or another from the dozens or hundreds of possible plaintiffs with standing to sue for enforcement of the Constitution’s blanket prohibition on foreign payments enshrined in the Emoluments Clause.

Let us all hope that it happens with this lawsuit, so that we can solve the mystery of Trump’s actual ties to Russia and either isolate the President from his businesses or simply use the financial consequences of violating the Constitution in order to direct him to step down for all of America’s national security and safety.

Here’s the information on Trump’s worldwide companies from the Democratic Coalition’s Scott Dworkin: