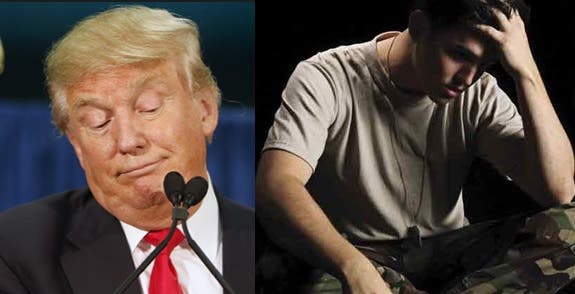 Millions of Americans are still reeling from the shock and horror of discovering one of Donald Trump’s first actions as President was to scrub the pages dedicated to civil rights, LGBTQ rights, and climate change from the White House website. Now Trump, a man who has sworn allegiance and devotion to veterans but has never actually shown it, has eliminated the Joining Forces page. Joining Forces was a program developed by Michelle Obama and Jill Biden that sought to help veterans find careers, help their spouses more easily move their careers between states, and expand wellness services.

According to the Military Times, “Over the last five years, Joining Forces has received more than 1.25 million hiring commitments for veterans and military spouses from its corporate partners. It also has helped broker legislation enabling spouses to transfer certifications across all 50 states.”

“I can … also remember when we had only two states that had military spouse legislation [on career transferability]. Mrs. Obama and Dr. Biden went to the governors meeting that year, and only ended up talking about military spouses. When you think about all the things they could have talked about, they chose just that one topic. They encouraged all the governors to pass legislation on that topic, and here we are today, with legislation in all 50 states.”

Every subsequent executive, all military officers, also praised Joining Forces for its important service to the veteran community. The only missing endorsement is Trump’s. On the campaign trail he refused to say whether he would continue Joining Forces if elected, while Hillary Clinton made a clear promise to maintain its good work. The uncertainty of whether Trump actually cares about protecting veterans is now even more uncertain with the removal of the Joining Forces page and the lack of announcement as to whether or not he will continue the program or restore it in some other form.

It is at the very least an attempt to prepare for significant changes and likely cuts to a program that is already producing incredible, life changing results.

More ominously, it seems to represent a willingness to stab veterans in the back after manipulating their support during the campaign with false promises and false hope. The men and women who courageously defend our country deserve better. They and their families make tremendous sacrifices on behalf of all Americans. For this, they should be honored and protected to the fullest extent by the government upon their retirement from service. They risk their physical and mental health, and their families risk losing a husband, wife, father, mother; it is our duty to repay them.