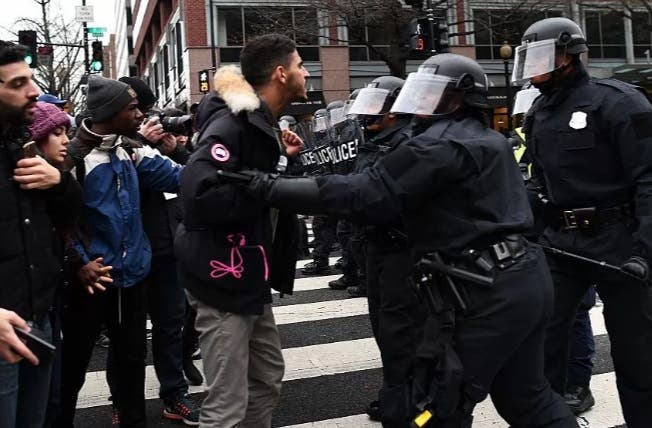 President Donald Trump is using sleazy underhanded tactics to slowly chip away at dissenters’ First Amendment rights. Over 200 people have been charged with felony rioting by the Superior Court, in spite of being innocent bystanders. Police arrested anyone who was in the vicinity of some minor property destruction that occurred during the inauguration protests, regardless of their actions.

There has been no effort made to distinguish between those who were inciting a riot and those who were just happened to be walking by. The U.S. Attorney for D.C., Channing Phillips, is indiscriminately prosecuting innocent bystanders and potential “rioters” with the same charges, which carry a maximum sentencing of ten years and a $25,000 fine. This is a blatant scare tactic to force anti-Trump Americans to stop demonstrating.

In addition to not distinguishing innocents from those seeking to riot, police made no attempt to separate protesters from journalists or legal council on site. Members of the National Lawyers Guild wear neon green hats to separate themselves from the crowd—this was not acknowledged by police; many of these lawyers are facing the maximum sentencing as well. News reporters Evan Engel, 30, and Alex Rubinstein, 24, were also arrested during the unjust “kettling”of the crowd by police. Kettling is a law enforcement tactic that involves penning protesters – or those who happen to just be on the street – into a blocked off area that they are not allowed to escape.

According to Think Progress, those confined to this kettle were helplessly subject to assault with pepper spray and “string-ball grenades.” They were not allowed to leave the cramped area, standing on their feet and without access to a restroom for hours. Engel reported that his camera was taken into police custody, obviously to keep the images he captured hidden from the press.

“The police here [in D.C.] always give three warnings to protesters before they give any action. In this case, there was nothing,” Thompson-Washington commented. “There was no order of dispersal, no warnings. They just immediately brought out their batons and pepper spray without any warning.”

As the nation’s capital, D.C. is normally very tolerant of protests. Typically protesters will be released the day they are arrested, and are sometimes fined.

Thompson-Washington warned that if this first demonstration is any indication, Trump’s bullying will continue. This is a man who is intent on silencing the people. Trump claimed his supporters were the “silent majority,” but after losing the popular vote by 3 million votes it is clear that Trump voters are in the minority. Trump is desperately trying to conceal the vast swathes of the American public that loathe him and all he stands for.

Thompson-Washington finds the quick degradation into unprecedented brute force and incitement of fear astonishing. She says,

I don’t know at what point the District has devolved into using those kinds of tactics to get people to comply. I hope it’s not an indication of what this coming administration is going to be like for the rest of us, because that’s not how it’s been thus far with protesting in the district. It’s really uncharacteristic of other actions we’ve seen in D.C. And then to ratchet up from fines to felony riot charges, that’s ridiculous.

Monica Hopkins-Maxwell, chapter head of the American Civil Liberties Union D.C. commented on how this administration is hell-bent on causing a nightmare for protesters going forward:

When the state comes down this hard in imposing this sort of charge from the get-go, it inevitably has a chilling effect on speech. Regardless of if it’s applied to these protesters, individuals engaged in vandalism, innocent bystanders, or for that matter outside of this context, the strategy of overcharging individuals in the first place is a gross abuse of government power.

What’s stuck in my craw is, this is an incredibly heavy hand. It’s the first day of the transition to power of a new administration that has made such an aggressive stance against immigrants, and women, and people are upset and want to exercise their First Amendment rights.

To have the U.S. Attorney slam down felony charges sends a really strong message that the government is willing to silence people, whether or not you were involved in criminal activity.

Trump’s ruthless efforts to silence disagreeing viewpoints is reminiscent of autocracy and must be stopped. This administration is willing to resort to threats and bullying in an attempt to get us to silently accept its disgraceful behavior. It is our duty as Americans to stand up to tyranny on behalf of all of our fellow citizens, and to not stop fighting until every citizen’s rights are secured.