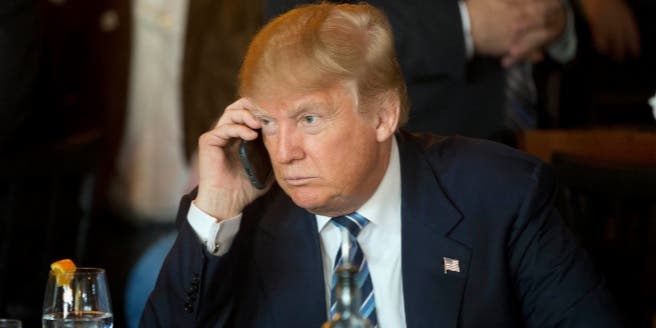 One of the defining themes of the 2016 election campaign was the witch-hunt directed at Democratic nominee Hillary Clinton over her use of a private email server as Secretary of State. Clinton was hauled before a Congressional inquiry to face accusations that she had put state secrets at risk and that they were somehow responsible for the September 2012 terrorist attack on the US consulate in Benghazi, Libya. She was forced to endure months and months of smearing by the conservative propaganda machine, and is likely to have lost the election because FBI Director James Comey decided to send a letter to Congress informing them of the discovery of possibly “pertinent” emails on disgraced Congressman Anthony Weiner’s laptop, which reignited the media firestorm and swung public opinion in Trump’s favor.

Donald Trump was one of the loudest critics of Clinton’s email server. “This is magnitudes worse, in my opinion and in the opinion of many people in law enforcement, this is worse than Watergate” said Trump on the campaign trail. “She committed a crime!”

Which is why it is gut-wrenchingly infuriating to learn that Donald Trump is still using his unsecured Android phone in the White House. The New York Times just published an interview with the President that revealed that when “Mr. Trump’s wife, Melania, went back to New York on Sunday night with their 10-year-old son, Barron, and so Mr. Trump has the television — and his old, unsecured Android phone, to the protests of some of his aides — to keep him company.”

After all the pearl-clutching and hand-wringing over Clinton’s email use during an election which saw email servers from both parties hacked by the Russian Federation, you would think the incoming administration and House Republicans would be just as concerned about cybersecurity in the Trump administration. But the silence from both parties is clear evidence that the entire charade was nothing but a partisan inquisition designed to tarnish one of our nation’s most dedicated public servants and to install an easily manipulatable bigot in the White House, ready to gut our government and our civil liberties on day one.