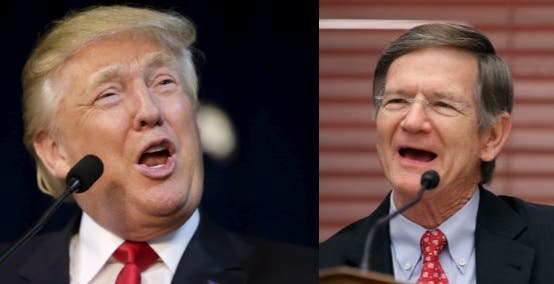 Republican legislators are lining up behind President Donald Trump’s lies like the good lemmings that they are. Congressman Lamar Smith (R-TX) asserted the American people would be better off if they tuned out all other sources of information and only obtained their news directly from Trump himself. This makes logical sense because, as Trump has said in the past, he has the “best words.”

Relive that moment below:

Smith, who is the Chairman of the House Science, Space and Technology Committee, was giving a speech on the House floor when he remarked that it is better “to get your news directly from the President. In fact, it might be the only way to get the unvarnished truth.” Smith made this audacious claim because “the national liberal media won’t print that or air it or post it.” Smith has been following Trump around like a good lapdog and was one of the first Republican members of congress to endorse his candidacy.

He is courageous, even fearless. Given the amount of hate directly his way he no doubt receives death threats, but that does not curtail his public appearances or seem to worry him in the least. He has conviction, he practices what he preaches. He does not waffle or waver.

Apparently, Congressman Smith is unaware of the numerous flip-flops Trump has already committed. Trump repeatedly has stated Mexico would pay for his ridiculous border wall, but he later changed his tune and said the American taxpayer would foot the bill. Did Smith forget in February 2016 Trump said, “We have at least 11 million people in this country that came in illegally. They will go out.” and then in November 2016 he said, “We have a lot of these people, probably two million, it could be even three million, we are getting them out of our country or we are going to incarcerate.”

Perhaps Smith has forgotten when Trump said in November 2012, “The electoral college is a disaster for democracy.” only to change his tune in November 2016 to say, “The Electoral College is actually genius.” Is Smith aware of Trump’s rhetoric on Trump University when he promised not to settle the lawsuit accusing him of fraud in February of 2016 when he said, “Trump University has a 98% approval rating. I could have settled but won’t out of principle!” and then in November 2016 he said, “I settled the Trump University lawsuit for a small fraction of the potential award because as President I have to focus on our country.” Indeed Trump does not waffle or waver. Right!

Perhaps Trump’s biggest waffle, which Smith says he does not do, puts him directly at odds with Smith’s own ideology. In March 2016 Trump said, “I am not a great believer in man-made climate change.” and then in November 2016 Trump said, “I think there is some connectivity. Some, something.” Smith, who was educated at Yale and has shown himself to be a true paragon of facts and reality, believes climate change is a hoax. Smith has been been on a crusade to show the world that they are wrong to notice that each Summer for the last several years have been the hottest on record, and that all of the data proving this is false.

It is of little surprise to see Smith align himself so closely with Trump, as he believes in the now widely mocked “alternative facts” that Trump’s senior adviser Kellyanne Conway says exist. There are not alternative facts, and Trump has proved himself time and again to be an individual who will say and do anything, in the moment, to get his way. The American people would be foolish to negate Trump’s record and to trust the word of a man like Smith who also clearly has trouble swallowing the truth.