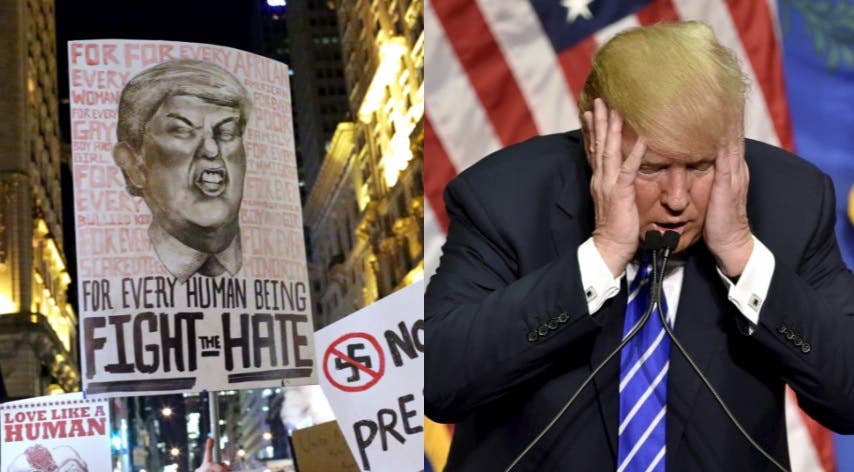 President Donald Trump is the toughest. He is the best. He has the fortitude to stand against all of the evils of the world. At least that is the venom which he spews to distract from the reality that he has the mental toughness of a 3-year-old and cannot handle the fact that the majority of the American people despise him and would not invite him to their cocktail parties. America’s great leader believes the protests are unfair and that he is not being allowed to “enjoy” the White House due to millions of Americans constantly protesting outside of the White House gates.

The newly minted 45th President of the United States has been throwing temper tantrums over the accurate media coverage he has been receiving from the sparse attendance of his inauguration ceremony in comparison to the attendance of the women’s march in Washington.

According to a White House source, who asked to remain anonymous as they feared losing their job, said Trump accused CNN of “gloating” by comparing the size of the crowds by placing side by side aerial views of the two events. Indeed, how dare CNN present information to the American people which shows Trump in an unfavorable light? Perhaps Trump found it surprising that so many women would protest his presidency after he signed an executive order attacking abortion rights.

Trump’s discontent is based upon his unrealistic belief that the press, with whom he has had a hostile relationship, would offer him favorable coverage once he assumed power in the Oval Office. This delusional pipedream of Trump’s is a crystallized example of his inane obliviousness and inability to understand the political environment which he himself sowed. However, while being a buffoon, Trump is keenly aware of the media’s perception of him and he’s told individuals close to him that he believes the media coverage has grown worse.

The White House  Minister of Propaganda, Sean Spicer, has been taking a bruising beating over following through with Trump’s edict of claiming that he’d of won the popular vote had it not been for millions of illegal immigrants voting for Hillary Clinton. When Spicer was asked why Trump continues using this talking point he said, “He believes what he believes based on the information he was provided.”

Spicer then offered up as evidence a report from 2008 by the Pew Charitable Trust, which Trump has cited before, and said that 14% of votes were cast by noncitizens. That report, in fact, is from 2012 and deals with voter registration numbers and has nothing to do with voter fraud.

Thus far the only strategy with which Trump’s team has been able to come up to battle his hemorrhaging ego is to keep him away from a television set. This is doomed to fail as they’ve not been able to dissuade Trump from embarrassing himself and the nation via his nonsensical, and often misspelled, Twitter posts. Instead, Trump will be forced to reconcile himself to being barraged for the term of his presidency with criticism. He is now the most watched man on the planet and he should start acting like it.  That includes not considering the White House to be his own personal compound to “enjoy”, but rather to understand it is the home of the American people that he serves who have every right to express their grievances with him.