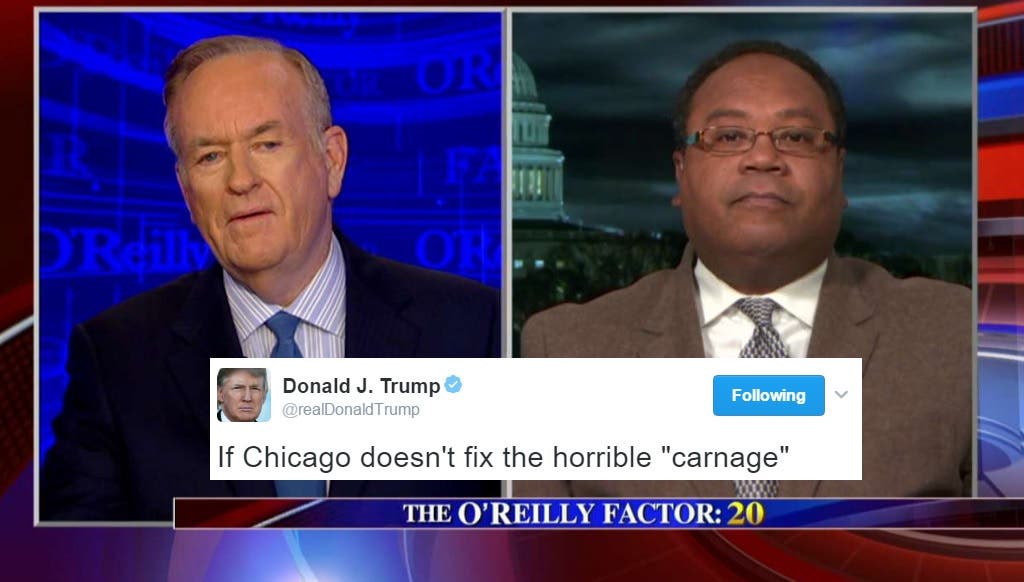 President-elect Donald Trump has been obsessed with the admittedly horrifying murder rate in the city of Chicago for some time, using the example of that city as evidence that all inner-city communities – and by that, he means impoverished minority communities – are crime-ridden and are stricken by an epidemic of murder.

Just tonight, Trump casually threatened to impose martial law on the city of Chicago if people don’t stop shooting each other.

What could have made him so upset that he felt the need to immediately take to Twitter? Could it be a piece of race-baiting propaganda designed to outrage old white men?

.@oreillyfactor on Chicago: “You know what else @POTUS could do? He could call in the Natl Guard…The governor won’t. Governor is afraid.” pic.twitter.com/PA20YMP58J

Horace Cooper on Chicago violence: “We absolutely need to bring in the US attorney, send these people off to federal prison.” #OReillyFactor pic.twitter.com/ll6CdwDXlR

Horace Cooper on #Chicago: "I don't know another word besides 'carnage' to describe the devastation that's been taking place." pic.twitter.com/jk6yJkpbTw

The President of the United States, the leader of the free world, just casually threatened a major political action over something he was told to do while he was watching television, which his aides say he enjoys much more than actually governing.

It’s hard to decide what’s more disturbing; that Trump is getting his political advice from FOX News, or that he thinks he can solve decades of socioeconomic disenfranchisement and the mass proliferation of firearms by simply “sending in the feds.”

Think about what this means. The propagandists at FOX News have the ability to influence the President in ways that nobody else does, since he refuses to listen to his aides and his briefings, preferring to trust in his own mind, because he’s “like a smart guy.” This is not the way a president should behave, but to be fair, Trump never pretended to not be a lazy ignoramus who automatically accepts anything that fits into his worldview as scripture.

It’s been four days. It’s going to be an even longer four years.