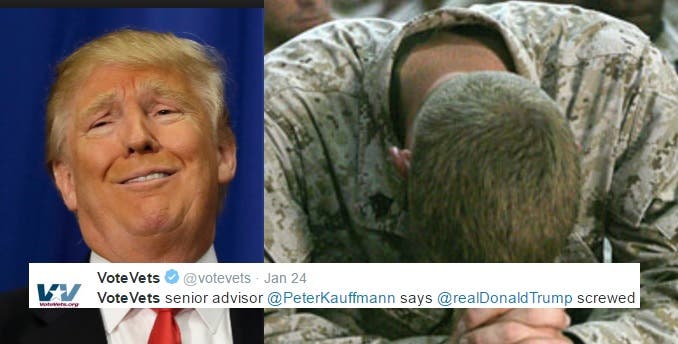 Donald Trump has already managed to screw over a surprisingly long list of Americans, from the sick to the workers to the very environment itself. Now, however, he’s gone after our veterans, and they’re not going to take it lying down. The policy in question is a result of (yet another) executive order Trump signed on Monday instituting a freeze on pay and hiring for all federal workers. The military itself is of course exempted from the freeze given Republicans’ nationalistic fetishization, but there is no such protection for the 623,000 veterans who make up some 31% of the federal workforce.

These brave veterans will now see their pay fall even more in real terms than it has already, pushing many over the brink into outright poverty. Moreover, the swelling ranks of physically and mentally ill vets that our nation too easily forgets about will see their already abysmal level of medical care decline even further as no new doctors and nurses will be hired at the already woefully understaffed VA. This will leave our veterans even more tragically underserved than they already are, a move that Peter Kauffman, senior advisor to the prominent advocacy group VoteVets, characterized as “the ultimate insult to our men and women who serve.”

Some of the nation’s largest veterans advocacy groups, however, have mobilized against Trump’s harmful executive order. Mr. Kauffman, for example, issued a scathing statement slamming Trump for “screwing hundreds of thousands of veterans out of better pay, and thousands more out of potential jobs.”

“Veterans who have families to feed, who may be saving up for a home, all of them have been let down by Donald Trump,” he added. “This shouldn’t be shocking. Donald Trump lobbied New York to kick disabled veterans, working as vendors, out from in front of Trump Tower. He has always been hostile to working veterans.”

Besides hurting veterans who are already working for the government, the hiring freeze also cuts off a vital lifeline for thousands of veterans looking for work. As previously noted, veterans comprise a significant percentage of the federal workforce, in part because of programs like the Veterans Employment Initiative, instituted by Barack Obama in 2009, that seek to train and hire veterans for government jobs. Once again, Trump is tearing down the progress that Obama made.

This entire assault on veterans smacks of a particularly cruel irony given Trump and other Republicans’ constant nationalistic bluster and slanderous rhetoric about the left’s supposed anti-Americanism. Trump attacked Obama and Hillary Clinton on veterans’ issues throughout the campaign even as he insulted those suffering from PTSD as weak. But those attacks, like almost everything else that comes out of Trump’s mouth, have proven to be nothing but populist deceit. What’s amazing is that so many working Americans continue to believe Trump is fighting for them even as he takes away more and more of our rights and benefits by the day.