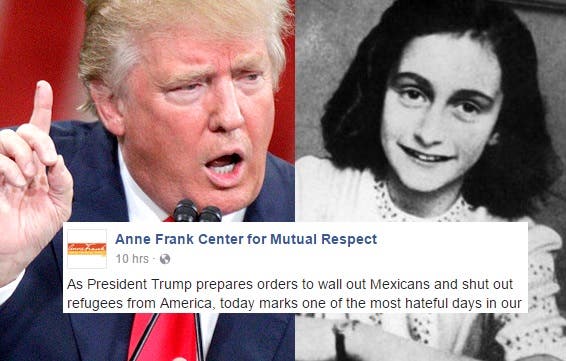 As President Donald Trump unveils a stunning bundle of unconstitutional and discriminatory executive orders – a registry on Muslim visitors to the United States, a moratorium on visas for citizens from eight Muslim nations, a weekly list of crimes committed by “removable aliens,” a reinstatement of the torture program, to name a few – he was met with a horrified response from Steven Goldstein, Executive Director of the Anne Frank Center for Mutual Respect.

Anne Frank was a Jewish girl who famously kept a diary as she and her family hid from the Nazis before being caught. She later died at the Bergen-Belsen concentration camp, most likely of typhus. The steps that Donald Trump is taking to discriminate and dehumanize Muslims and illegal immigrants mirror the early actions that the Nazi Party took to isolate and dehumanize European Jews, paving the way for mass complicity in the systematic extermination of six million innocent people.

As President Trump prepares orders to wall out Mexicans and shut out refugees from America, today marks one of the most hateful days in our nation’s history. Donald Trump is retracting the promise of American freedom to an extent we have not seen from a President since Franklin Roosevelt forced Japanese Americans into internment camps during World War II. Today the Statue of Liberty weeps over President Trump’s discrimination.

President Trump is beyond the wrong side of history. He is driving our nation off a moral cliff.

President Trump is now exacerbating the largest global refugee crisis in history. His slamming America’s doors on the starving, the wounded and the abused is a grotesque blot on our nation’s history of freedom. The President’s actions are an embarrassment to the timeless vision of America as inscribed by Emma Lazarus to “give us your tired, your poor, your huddled masses yearning to breathe free.”

Demonizing refugees and immigrants, and spending billions of taxpayer dollars to keep them out of our nation, will go down in American history as one of the most tragic deviations from our national conscience.

Mr. Goldstein summarized what we’re facing perfectly. Donald Trump’s actions are a despicable affront to the values of tolerance, diversity, and religious pluralism that our nation was founded on. Our Founding Fathers will be rolling in their graves tonight as Trump’s reckless string of executive actions shames our nation before the world and unleashes the darkest demons of the human spirit.