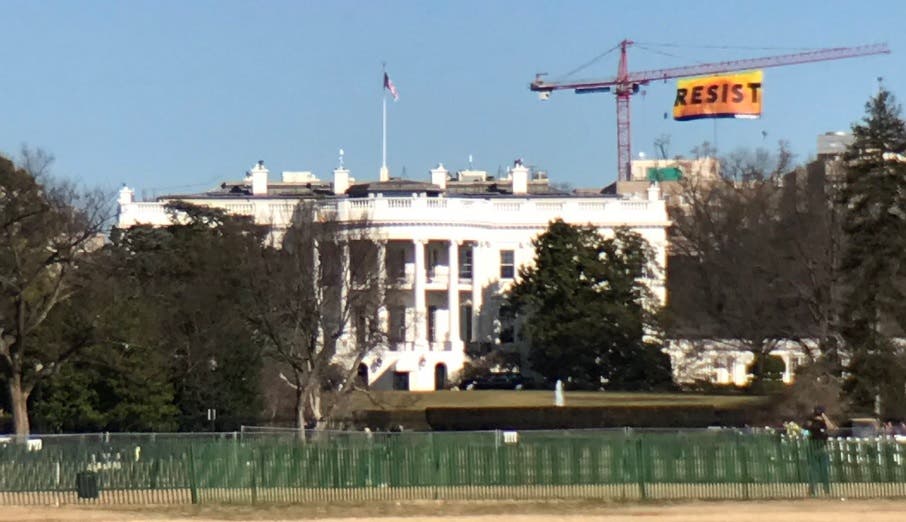 Daring members of the Greenpeace environmentalist group have just trolled Donald Trump in epic fashion. During the night, several activists, joined by their comrades from the Rainforest Action Network, scaled a construction crane and hung a giant banner that reads RESIST from the arm.

300 feet above the #WhiteHouse @greenpeaceusa activists have deployed a hand painted love letter to the people #lookup #resist #resistoften pic.twitter.com/XAP20AAMia

The placement of the banner couldn’t be more perfect.

So moved to be here in DC to witness this bold act of resistance in the face of Trump's regime. #resist #greenpeace #resistoften pic.twitter.com/sESaubYVUQ

A day after our new despot issued gag orders preventing government scientists from sharing their findings with the taxpayers who funded them or from discussing anything with the media at all, it is truly inspiring to see the resistance fighting on every front.

Every minor show of defiance, like the Badlands National Park Twitter account sending out a flurry of climate science tweets or the Department of Defense tweeting out support for resettled refugees who grew up to become Marines, is a critically important act that will snowball into a movement that even Trump and his oligarch cronies can’t ignore.

Take the message of Karen Topakian, chair of Greenpeace Inc, to heart:

Take action against all odds. Make the impossible possible. Fight, persevere, and win. THIS is what our resistance looks like. #ResistOften