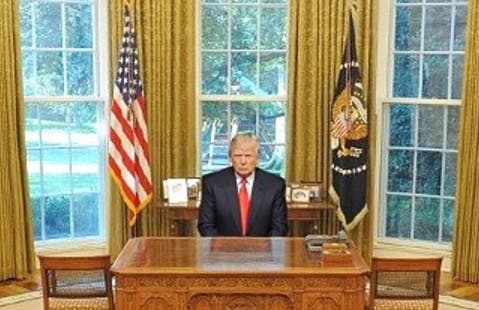 According to The New York Times Donald Trump has made himself at home in the White House by hanging up a portrait of notorious ethnic cleanser and fellow “populist” Andrew Jackson in the Oval Office. The move represents a shocking admiration in Trump for a man who was personally responsible for the deaths of thousands upon thousands of innocent Native Americans in the final stages of the Native American genocide.

President from 1829 to 1837, Jackson oversaw one of the worst episodes of ethnic cleansing in American history. Under his reign tens of millions of acres of land were confiscated from Native American tribes in the Southeast for white settlement, a process that culminated in the notorious Trail of Tears in which some 50,000 Cherokee were forcibly evicted from their land and sent on a forced march to Oklahoma in which some 5,000 died. Perhaps more than any other president in history, Jackson symbolizes the brutality of the centuries-long genocidal policy euphemistically known as “indian removal” – backed by populist rhetoric like Trump’s – that led to the final triumph of white America over this land’s native inhabitants.

The blood of tens of thousands of Native Americans, murdered because of the color of their skin and the language they spoke, is on the hands of Andrew Jackson. Now, it is tainting the walls of the highest office in the land, and Trump and his white nationalist supporters couldn’t be happier to have a genocidal maniac in the Oval Office. Just last week Trump called Jackson “an amazing figure in American history – very unique in so many ways.”

The admiration for Jackson among Trump and his fans seems to be a combination of veiled admiration for his racism and genuine ignorance and apathy, which is unsurprising given how little the United States acknowledges the genocide it was founded upon. Even mainstream publications like The Hill continue to refer to figures like Jackson as “controversial.” If Andrew Jackson is controversial so is Pol Pot.

Moreover, if Trump’s political moves today are any indication, the Jackson portrait is far from apolitical, instead serving as an inspiration for Trump’s own round of xenophobic cleansing. New executive orders signed today would ban immigration from seven Muslim countries, build a border wall with Mexico, lay the groundwork fork a registry of American Muslims, vastly expand Immigration and Customs Enforcement’s ability to deport illegal immigrants living peacefully in the country, reinstate the CIA’s secret dictatorial torture program, and create a weekly anti-immigrant propaganda publication issued by the government. To avoid a repetition of Jackson’s crimes we must do everything we can to combat the Trump agenda.