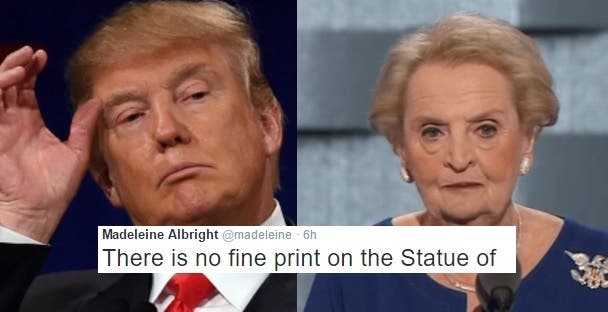 The visceral response to President Donald Trump’s plans to enact a campaign promise to ban refugees from entering the United States has been swift. The formidable former Secretary of State, Madeleine Albright, took to Twitter to express her outrage at Trump’s ignorantly bigoted policy. She further vowed that if Trump was going to follow through with his edict that she would register herself as a Muslim.

Albright, who served under former President Bill Clinton, had a storied career in American diplomacy. Before she was the 64th Secretary of State she served as 20th United States Ambassador to the United Nations. When Albright speaks, it is wise to listen. She tweeted:

I was raised Catholic, became Episcopalian & found out later my family was Jewish. I stand ready to register as Muslim in #solidarity.

The former Secretary of State reminded her Twitter followers that the United States is a nation of inclusion, and not exclusivity. To maintain the ideals of the founders of the United States the borders must remain open to welcome individuals of every race, class, orientation, nationality, and religion with open arms. She tweeted:

There is no fine print on the Statue of Liberty. America must remain open to people of all faiths & backgrounds. #RefugeesWelcome pic.twitter.com/4LvMiZTRJJ

The executive action by Trump calls for a blockage of all admissions of refugees from the nation of Syria in perpetuity. Furthermore, all individual refugees from all countries will be suspended for at least 120 days, with Trump reserving the right to extended the period arbitrally as long as he likes. Beyond that Trump’s order calls for “safe zones” to be established within the nation of Syria by the Secretary of Defense. This implies the United States will be dumping further treasure and blood into the nation to enforce such a safe zone, which itself will likely turn into another military quagmire the likes of which Trump routinely criticized during his campaign.

It appears Trump is going to continue on his quest to vilify individuals around the world who do not share his warped belief system. As the president he has the unilateral ability to sign executive orders at his erratic whims and at the present time there is little which can be done to stop him but to unite as one people, no matter race, color, or creed, and show him that we will not stand for the horrifying desecration of our national values.