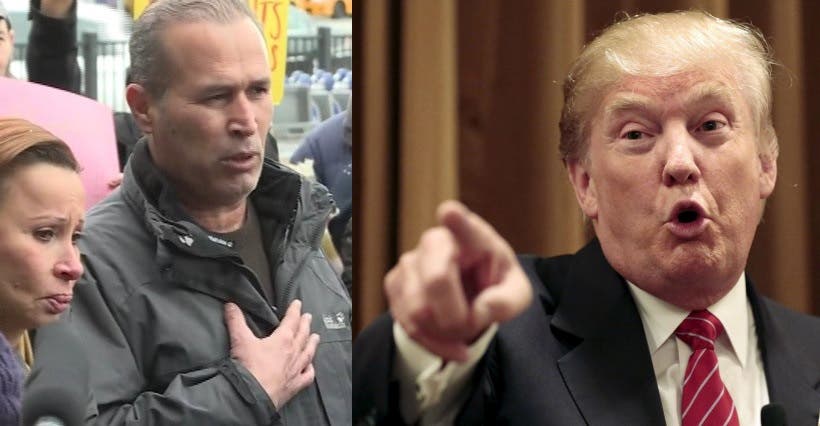 Donald Trump’s executive order restricting the entry of Muslims from seven Muslim-majority nations and immediately ending the refugee resettlement program has left hundreds of people in limbo. Unaccompanied or orphan children set to be placed with American foster families are being forced to remain in refugee camps. Students travelling while studying at American universities found they were denied entry. Green card holders have been turned away or handcuffed and given religious tests.

But in order to illustrate just how appalling this unforgivable edict truly is, consider the very first people who were denied entrance to our once-great nation, as told by Rep. Jim Cooper (D-TN).

The first two refugees kept out of America by President Trump's order are Iraqis who helped US troops survive during the war.

These men risked their lives for years to keep our troops safe. One was with the 101st Airborne. This is no way to treat our allies.

Hameed Khalid Darweesh, who has worked as an interpreter for American troops for ten years, helped save American lives and nearly lost his own twice in the process. He was detained upon arrival at New York’s John F. Kennedy Airport and was only released after massive protests by furious citizens.

“What I do for this country? They put the cuffs on. You know how many soldiers I touch by this hand?” said Darweesh to the New York Times.

He was joined in detention by Haider Sameer Abdulkaleq Alshawi. His wife, Duniyya, and her brother worked for the US contracting firm Falcon Security during the Iraq War, causing local jihadi groups to label them as collaborators. After insurgents put an IED in the car of Duniyya’s brother and killed him, the Alshawi family fled to Iraqi Kurdistan and applied for refugee status. Ms. Alshawi is now a permanent resident who has lived in Houston since 2014; her husband had just finally cleared the vetting process and was on his way to join his wife and child after years apart.

His seven-year-old son was waiting for him at the airport. He still hasn’t seen his dad.

This is what Donald Trump’s horrifying law does. It tears families apart and leaves innocent people in terrifying danger. It does nothing to make us more safe; in fact, it makes us less safe by tarnishing our image in the eyes of the world and creating a hostile environment which supports jihadi propaganda and makes American Muslims feel unwelcome. Hundreds across the world have risked their lives to help American soldiers wage their wars in enemy territory; turning our backs on them now is the height of cowardice. The term “un-American” gets bandied about quite a bit, but there’s truly nothing so offensive to our values and the diversity which made our nation great than the actions of the Trump administration over the past week.

Darweesh risked his life, and the safety of his family, for ten years to help keep American troops safe. Donald Trump dodged the draft so he could cavort with models on his dad’s dime.

Who deserves to live here more?