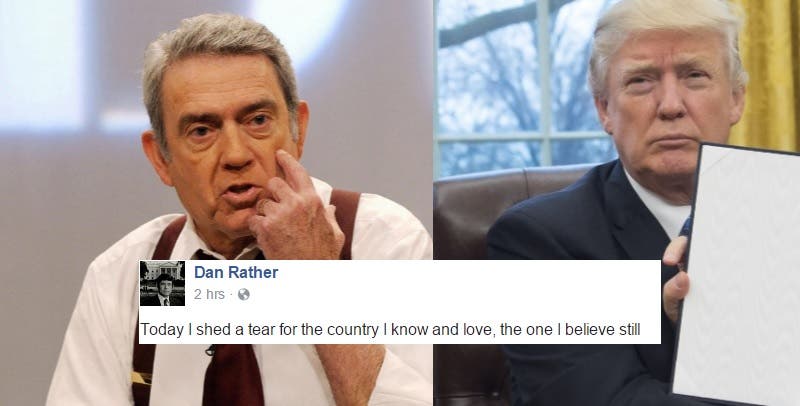 This has been one of the darkest weeks in our national history. The avalanche of unconstitutional and morally vacant edicts streaming out of the Trump White House has been staggering in both speed and sheer heartlessness as the values that made our nation great are trampled. Baseless excuses of national security concerns are the hoods that mask the legislation of white supremacy.

Legendary journalist Dan Rather took to Facebook tonight to pen a powerful condemnation of Trump’s ban on citizens from seven Muslim nations and the ending of the refugee resettlement program:

Today I shed a tear for the country I know and love, the one I believe still beats in the heart of most of its citizens.

The United States became the most powerful nation in the history of mankind not merely on the basis is its fearsome military, as lethal and well trained as that may be. It wasn’t solely based on its unprecedented economic engine, as dynamic and far-reaching as that may be. America’s greatness was forged by a Constitutional compact of grand and universal ideals that the country has tried to live up to ever since.

For generations, we have been an imperfect but vital beacon of freedom to a world too often wandering and failing in moral confusion. But that ultimate strength has dimmed considerably in light of the recent actions on immigration from the new President Donald Trump. We are turning around desperate refugees. We are singling out men, women, and children on the basis of their faith – and we are doing all of this with a randomness and capriciousness that defies reason.

A colleague of mine used the term “heartless” to describe so much of the President’s executive actions. Sadly, I found it an apt and dispiriting diagnosis—especially when faced with the results of his executive order on immigration. For over the years, I have seen that our greatest American leaders extol empathy rather than condemnation.

They have known that in a complicated world, it is best to make policy choices with a scalpel – not a hacksaw. Sometimes, when our national security is threatened at the level of World War II, all-out conflict is the only recourse. But those instances are by far the exception.

From Vietnam, to the Iraq War, from Japanese internment camps to the centuries-long persecution on the basis of race and ethnicity that almost toppled our democratic experiment, broad strokes channeling our least compassionate and most jingoistic impulses have always made us weaker rather than stronger.

Today, in the wake of his one-man decision to wreck and reverse immigration policy so suddenly, there is chaos and confusion mixed with heartbreak and fear. A well thought-out, measured overhaul of immigration policy, with organized-in-advance measures to implement that is one thing—and one that perhaps a majority of Americans would support.

But this mess, created overnight, is quite another. With this, we have emboldened our enemies who want to see nothing else than to compete in a world of moral relativism. In the Cold War, our struggles over civil rights fed into the propaganda of the Soviet Union – as our new actions fuel the extremism Mr. Trump claims to be attacking.

Too many people during the campaign explained away Mr. Trump’s irresponsible rhetoric as metaphors and euphemisms. These are not concepts he understands. Serious foreign policy experts know that this is a boon for our enemies and undermines our democratic principles. But too many Republican leaders in Congress, even ones that denounced the Muslim ban during the campaign, stand by cheering it now. History will mark their names, as it marks this moment.

This will be challenged in the courts, who may very well strike it down. But damage, real damage, has been done to our global image. I believe Vladimir Putin is smiling, and would-be global powers like China see a vacuum forming that they will be eager to fill.

I still remain optimistic that the vast majority of American people will recoil and speak out at this unwise policy. But whether we like it or not, as the detentions and impediments already springing up make all too real, this is the stated de facto policy of the United States today. Every day that it goes on, every day the chaos, confusion and heartbreak deepens, America loses more pieces of its soul and standing in the world.

We desperately hope that the courts will fulfill their function and uphold the spirit of the Constitution in blocking the enforcement of these tyrannical edicts – which certainly violate the 1965 Immigration and Nationality Act, which precludes discrimination on the basis of national origin or place of residence.

But it is up to us, the responsible and concerned citizens of this once-great nation who are shocked and appalled at seeing our descent into the hellish abyss of fascism, to stand up and make our voices heard. It is extremely inspiring to see the thousands that are currently protesting outside of John F. Kennedy Airport and Chicago’s O’Hare Airport. That is exactly what Trump needs to see – the nation united in opposition to him and his heinous plots.