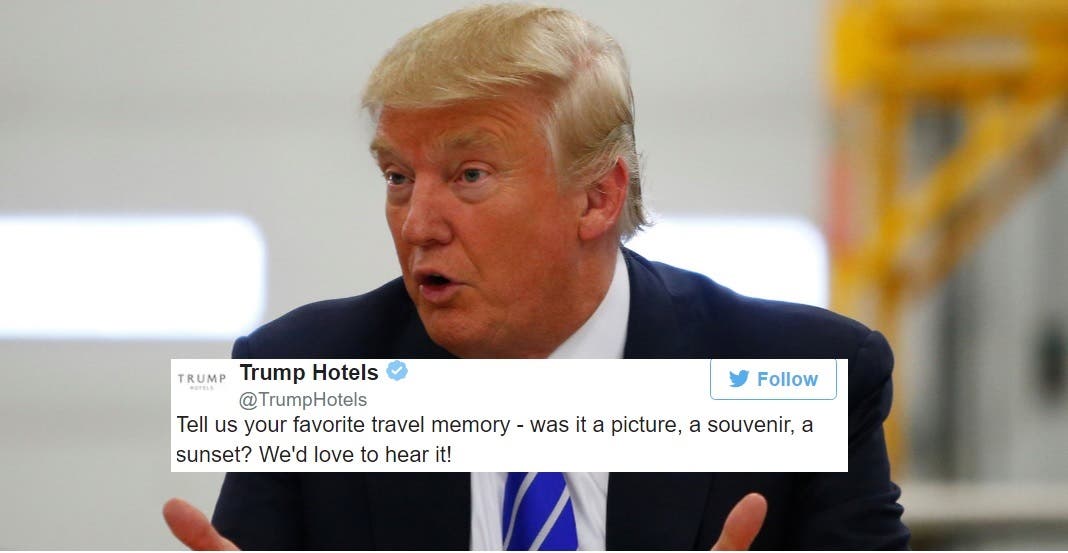 As Donald Trump’s appalling anti-Muslim immigration executive order led to hundreds of refugees and green-card holders being arrested and detained at airports across the United States, his own hotel chain made the extremely poor decision to ask the internet to share a favorite travel memory.

Tell us your favorite travel memory – was it a picture, a souvenir, a sunset? We'd love to hear it!

Twitter immediately jumped on the company, barraging them with powerful stories of their families’ immigration woes and some well-deserved mockery.

.@TrumpHotels hearing about my grandfather's perilous trip to America by boat as a child alone. I wonder if he would be let in today?

That time I fled Communist Romania to a refugee camp in Austria, came to America, & years later became an exec @Google creating 10ks of jobs https://t.co/iaerM5gLHc

Visiting San Francisco – the American city my grandparents settled in after leaving the Philippines after WWII.

oh thanks for asking @TrumpHotels My day at #turnberry = awesome wifi – great security & knowing Trump was watching through the window. pic.twitter.com/jEUgNONtVH

@nybooks When @realDonaldTrump kicks the bucket, my favorite trip will be visiting his cemetery to literally shit on his grave.

my Lolo & his family coming to Daly City, where they would make a home in a welcoming country pic.twitter.com/o8wS6DG5Jw

I remember the old days, when you could travel abroad without feeling ashamed of being an American in the Trump era.

It was this beautiful dream where the doors to all your hotels were closed for business. #trumpboycotthasalreadybegun

That time in Russia where the tiny-handed guy in the room next to me was getting peed on by two sex workers.

The incredibly poor timing of that tweet is just mind-boggling. It really hits home the vast divides that separate sociopathic billionaires like Trump from real people; the horror and the fear of people whose lives and families are at risk after traveling over hundreds of miles in hopes of starting a new life juxtaposed against a casual celebration of bourgeois luxury and an attempt to secure you booking an overpriced hotel room in one of Trump’s unprofitable hotels.

Donald Trump’s ban on Muslims and the end of the refugee program is an outrageous insult to the countless American men and women who fought and died to preserve our values of liberty, justice, and the pursuit of happiness for all. We must resist Trump and his neo-Nazi puppet master at all costs.