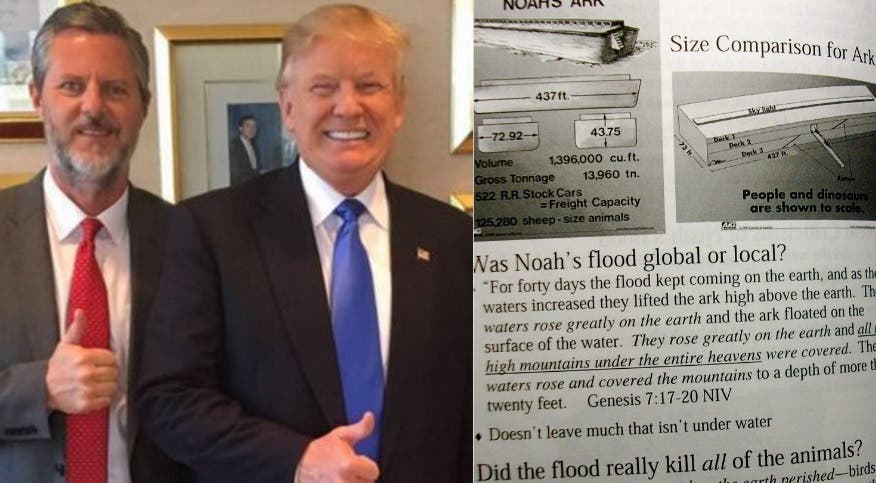 It only seems fit then that the latest saga in America’s nightmare sees the president appoint evangelical Christian extremist Jerry Falwell Jr. to a higher education task force. Falwell is a lawyer and the president of Liberty University, widely recognized as the most fervently Christian campus in the U.S. – with all the science denial and Biblical literality that entails, as illustrated in this “science” book:

It’s almost funny: A man who believes in religious extremism on par with the Taliban has been chosen to reform America’s higher education system. But there’s a reason Trump has chosen such an unsuitable candidate.

Falwell endorsed Trump early on his campaign trail, his support greatly helping Trump in the Iowa caucuses. It would appear that Trump hasn’t forgotten to reward this particular crony. He wants Falwell to cut government regulations on universities, including federal rules on the investigation and reporting of sexual assaults on campus.

Falwell was the topic of controversy in October when he pulled a Liberty University Newspaper column criticizing Trump’s misogynistic remarks and tendencies. Falwell’s lame excuse was that “we’re all sinners”.

Falwell reportedly intends to bring a focus on “overregulation and micromanagement” to the task force. Falwell has previously stated that “there’s too much intrusion into the independent accreditation…[and] into the operation of universities and colleges.”

What this means is that Falwell is likely to remove restrictions on accreditation to allow more religious higher education institutions, as well as remove limitations on religious donors financing schools and what can be taught at university. This goes hand-in-hand with Education Secretary Betsy DeVos’s preference for private religious schools over public ones.

A dark foreshadowing of what Falwell has in store for universities can be found in his institution: Liberty University is a school that is equipped with high-end laboratory equipment, including gene sequencers and nuclear magnetic resonance spectrometers. However Falwell’s faculty teach biblical creationism alongside evolution. Even a limited knowledge of both topics would reveal that they are completely incompatible and at odds with each other.

The absolute hypocrisy of evangelical support for Trump is hard to believe. For some reason this extremely conservative demographic sees no problem endorsing a president who has appeared on the front covers of pornographic magazines and has openly boasted about his adultery and sexual assault.

Falwell and DeVos are bad news for America. They will seek to infringe on secular education and in so doing further damage America’s already troubled education system. Falwell wants to remove laws on reporting sexual assault on campuses at a time when 35 women in every thousand report being raped on campus, although the figure is likely to be much higher.

Ultimately, this appointment damages children and students across America, and therefore the future of our nation. Great strides in academia were never made when religious bodies influenced academia. Likewise the plight of female students will only get worse, as Falwell no doubt intends to brush the issue of rape on campus under the proverbial rug.

America is home to the world’s best academic institutions, but if Trump and Falwell have their way it’ll soon be full of religious nut jobs legally spouting nonsense while real academics and students are left in the gutter.