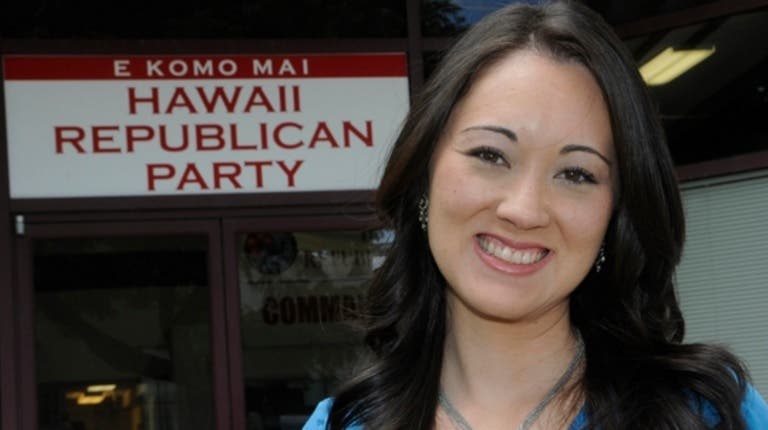 There is no room for diversity or freedom of speech in the GOP, especially now that Trump is in charge. Beth Fukumoto, Hawaiian Republican minority leader, has been voted out of her leadership position by her fellow Republicans for refusing to stay silent about Trump’s sexism and xenophobia, according to the Honolulu Star-Advertiser. Considered a rising star of the fledgling Hawaiian GOP (they only hold 6 out of 76 seats) she has since announced she would like to join the tolerant and open-minded Democrats, since her former party can no longer accept her.

Fukumoto was threatened by her Republican colleagues after speaking out against Trump, calling him a bully, at the Women’s March in Honolulu. Her colleagues warned her to keep quiet about Trump for the next four years—regardless of his actions. Of course, Fukumoto refused to be intimidated by the corruption implicit in the GOP. In spite of these Republicans threatening to vote her out, she said no. Ultimately, they did vote against her 3-2.

At 33 years old, Fukumoto is able to reach younger people not typically attracted to the Republicans, and for good reason—they openly cater to a singular group of white men. Hawaii’s GOP can expect more of the same spinelessness. Their Republican representatives across the country, are happy to idly let Trump run haywire, undoing the fabric of our country from the inside out. This party clearly does not care about the people who elected them. It is because of this that Fukumoto can no longer consider herself a Republican.

The change became official today. Fukumoto was voted out of her position for refusing to blindly follow a man she knows is immoral. “I believe it is our job as Americans and as leaders of this body to criticize power when power is wrong,” she eloquently stated at the House floor session earlier.

Reps. Gene Ward, Bob McDermott and Andria Tupola all voted to have Fukumoto silenced. Reps. Cynthia Thielen and Fukumoto voted against her being unfairly voted out; Rep. Lauren Matsumoto did not vote at all. Fukumoto expressed how the Republican party, which claims to be centered on family values, has become more and more corrupt and aggressive—with Trump at the helm, there is no turning back.

“In the last couple years, I’ve watched leaders in the Republican Party become less and less tolerant of diverse opinions and dissenting voices,” she commented in a statement. “Today, I’m facing demands for my resignation from leadership and possible censure because I raised concerns about our President’s treatment of women and minorities. I’ve been asked by both my party and my caucus to commit to not criticizing the president for the remainder of his term and to take a more partisan approach to working in the Legislature. That is not a commitment I can make. As a representative of my community, it is my job to hold leaders accountable and to work with anyone, regardless of party, to make Hawaii a better place for our families.”

With that, Fukumoto submitted a letter to those in her district—the people who voted for her—asking if they would be okay with her switching parties. An exemplary politician puts whoever they represent first, not a president who openly hates anyone unlike himself.

“This morning, I sent a letter to my district explaining that I would like to leave the Republican Party and seek membership in the Democratic Party,” Fukumoto explained. “When I was re-elected in November, I was elected as a Republican, and I want to honor my community’s choice by consulting them before any decision is made. As I articulated in my letter, I encourage my constituents to contact me with input and provide feedback. I was elected by the people of Mililani, and I am here to represent them.”

With Fukumoto’s admission that she was threatened (and ultimately voted out of her job as minority leader) by other Republicans in regards to her opinion on Trump, it seems clear that this is happening across the party. This will no doubt result in unchecked cronyism, with the worst of the swamp encroaching on our civil rights, with little to no consequence. Republicans and Trump especially, do not care about us—they are self-interested, cowardly and should be afraid.