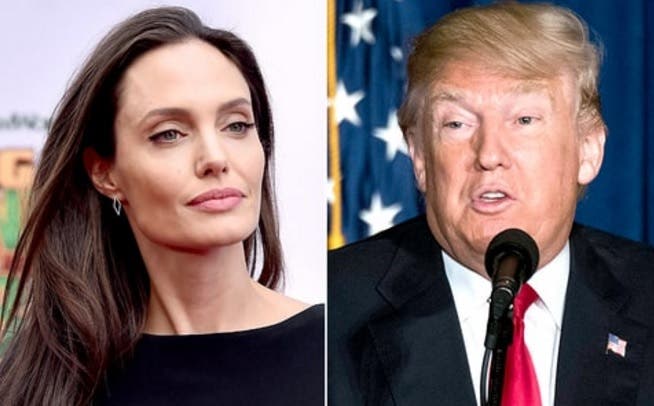 World-famous actress and humanitarian activist Angelina Jolie has penned a blistering op-ed for the NY Times in which she delivers a cool and nuanced dissection of Donald Trump’s hostile, hate-driven ban on Muslims and refugees.

Jolie has a special perspective on this issue—all of her children were born abroad but are American citizens. As she begins her statement, she points out that especially that by banning refugees, we are turning away children and those who need us the most; branding them as unsafe though they are helpless, simply because of where they are born. Jolie sets the tone by saying:

“I also want to know that refugee children who qualify for asylum will always have a chance to plead their case to a compassionate America. And that we can manage our security without writing off citizens of entire countries — even babies — as unsafe to visit our country by virtue of geography or religion.”

Like all Americans who refuse to blindly follow Trump, she is interested in real—not alternative—facts. “It is simply not true that our borders are overrun or that refugees are admitted to the United States without close scrutiny,” she explains. And she’s right. Refugees must deal with double the vetting and the waiting that immigrants must face. “Refugees are in fact subject to the highest level of screening of any category of traveler to the United States. This includes months of interviews, and security checks carried out by the F.B.I., the National Counterterrorism Center, the Department of Homeland Security and the State Department,” she adds.

Taking this a step further, she makes an impassioned case for why refugees are not a threat to the United States, but are merely threatened themselves. Refugees flee brutal regimes and bloody civil wars, famines and droughts, floods and rising seas. It is a miracle they are alive more often than not. Jolie has seen this first hand and describes how “furthermore, only the most vulnerable people are put forward for resettlement in the first place: survivors of torture, and women and children at risk or who might not survive without urgent, specialized medical assistance. I have visited countless camps and cities where hundreds of thousands of refugees are barely surviving and every family has suffered.”

She reminds us that the US and the Western world barely accept a fraction of the world’s refugees, in spite of being able to adequately house this population and provide them with some kind of opportunity. Jolie explains, “And in fact only a minuscule fraction — less than 1 percent — of all refugees in the world are ever resettled in the United States or any other country. There are more than 65 million refugees and displaced people worldwide. Nine out of 10 refugees live in poor and middle-income countries, not in rich Western nations. There are 2.8 million Syrian refugees in Turkey alone. Only about 18,000 Syrians have been resettled in America since 2011.”

Closing our doors to the refugees of the Syrian Civil War is condemning them to a death sentence as surely as it was to turn away the boats carrying Jewish refugees in the Second World War.

But more than that, closing our doors sends a message to Muslims around the world – and to Muslims living in the United States – that they are not welcome here. It makes the propaganda of extremist groups more effective. “See here.” whispers Daesh (ISIS/ISIL). “America hates Muslims. They don’t want you there. You’ll never be like them. You are like us.”

“The lesson of the years we have spent fighting terrorism since Sept. 11 is that every time we depart from our values we worsen the very problem we are trying to contain. We must never allow our values to become the collateral damage of a search for greater security. Shutting our door to refugees or discriminating among them is not our way, and does not make us safer. Acting out of fear is not our way. Targeting the weakest does not show strength.”

Her thought-out, moving op-ed might be met with a string of tweets demonizing her in a reductive, likely sexist way, come tomorrow. That is our President’s style. He ignores the facts and the bigger picture; he will stop at nothing to stroke his own ego. Like a child, he does things to prove he can, regardless of consequence and completely ignorant to how he will come off. Unfortunately, he is hurting countless in the throes of his tantrums.

Angelina Jolie wants America to know that what he is doing is wrong. She could have been silent to not alienate any fans, but she spoke out, giving voice to those who cannot stand up for themselves—those who need advocates and support more than anyone, innocent refugees whose numbers are unfortunately growing by the day. These same refugees are in this situation because of the consequences of American aggression and now they are being denied even the hope of entry into America and a chance at a better life like our ancestors got.