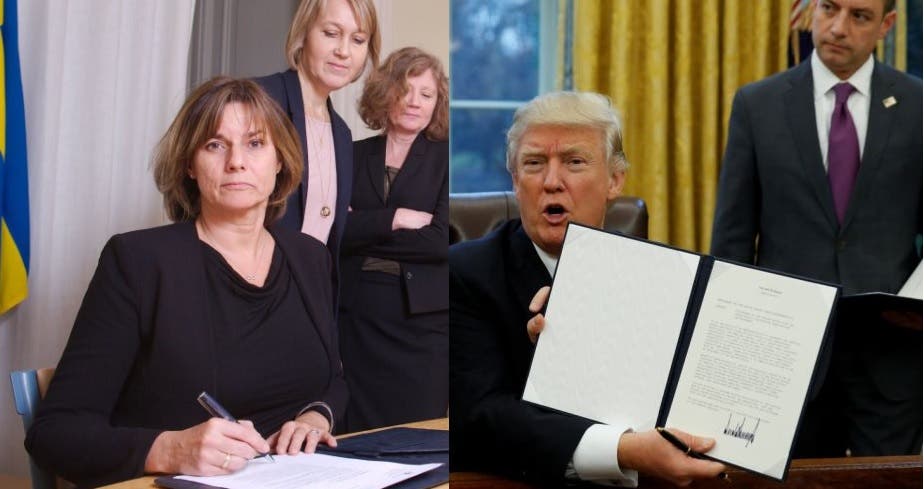 On January 23, President Trump signed a devastating anti-abortion executive order while surrounded exclusively by white men. The executive order prevents American aid funds from going to any health organization that even mentions to a woman that safe medical abortions are available in her country. This is a catastrophe for women’s health globally and family planning that empowers women in developing countries.

When Lövin signed the new Swedish law she surrounded herself exclusively with women, painting a picture of what progressive politics really looks like. The law requires Sweden to reach carbon neutrality by 2045.

Just signed referral of Swedish #climate law, binding all future governments to net zero emissions by 2045. For a safer and better future. pic.twitter.com/OqOO2y8BU6

The image breaks down conventional stereotypes about politics and the role of women in society. It is not unusual to see a group of male politicians taking action but is incredibly (and unfortunately) jarring to see a group of powerful women leaders. Sweden is taking down gender stereotypes and blazing a trail towards fundamentally changing global climate change policy.

When asked whether this photo was deliberately targeting the Trump Administration a spokesperson for Lövin said, “You can interpret it as you want. It’s more that Sweden is a feminist government and this is a very important law that we just decided on. We need climate leadership in the world today. And to make the Paris agreement happen we need climate leadership. I would ask everyone to make their own interpretation.”

Our interpretation is that while Sweden is ultimately showing environmental leadership and shaping the role of women in politics, they also engineered a subtle critique of Trump. Expect furious tweeting from the petulant child currently occupying the White House.