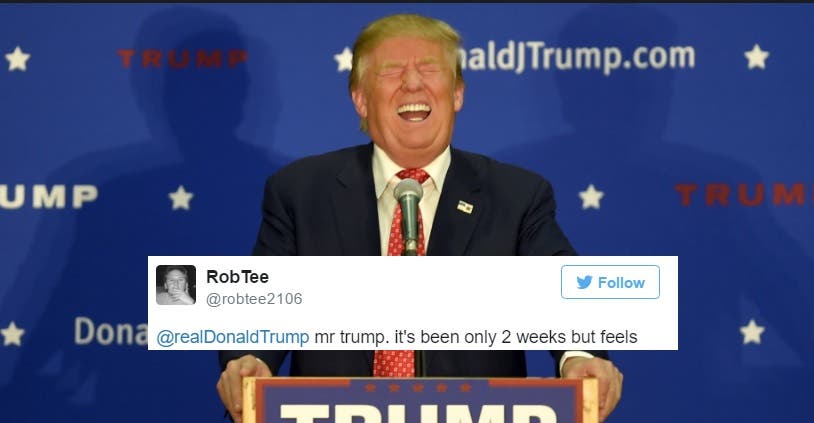 President Donald Trump rode a wave of populist anger all the way to White House. He packed stadiums with tens of thousands of individuals to which he made a litany of promises. He would fix the economy and “make America great again” by “draining the swamp.” Once taking power, however, Trump has turned an about face and done the exact opposite – and his supporters have noticed. There is so much discontent and buyer’s remorse amongst Trump supporters that a Twitter account named “Trump Regrets” has exploded with a flurry of activity where they list all of the reasons why they regret casting their vote for him.

In just two months the account “@Trump_Regrets” has gained international attention and a stunning 186,000 followers. The list of complaints are endless. Some regrets listed find Trump’s behavior unbefitting of a president, while others are outraged at his nonsensical policies. The best of the best can be viewed below:

@realDonaldTrump mr trump. it’s been only 2 weeks but feels like 2 yrs. please don’t make me sorry I supported you.

@realDonaldTrump stop acting like Hitler. I supported you all the way. But your actions are making me ashamed. The way U R doing it is wrong

@realDonaldTrump I’m so ashamed I voted for you. York first 8 days have been a disgrace seriously what the hell is wrong with you get out

@realDonaldTrump I voted for you and DeVos is a BAD BAD choice! Your suppose to drain the swamp not add to it.

I want my vote back! @POTUS news agencies get fined for false news. #FinePOTUS #DishonestDon #changemyvote Trump is crazy with power. https://t.co/S4PHlbywot

OK explain to me why as a Dr for the military you are freezing my job..I voted for you and my wife..

@realDonaldTrump I voted for you. But my mom called me and told me I can't stay on her plan #ObamaHadMeCovered

I made a mistake voting for Trump. Everyone I know now sees his deceit and greed. This Russia thing…Trump is Traitor

I voted for you and wholly regret it. You're attempting to take the country in a dark direction.

I wish Trump would stop making me regret my vote by acting like a spoiled child.learn to play in the sand box with others