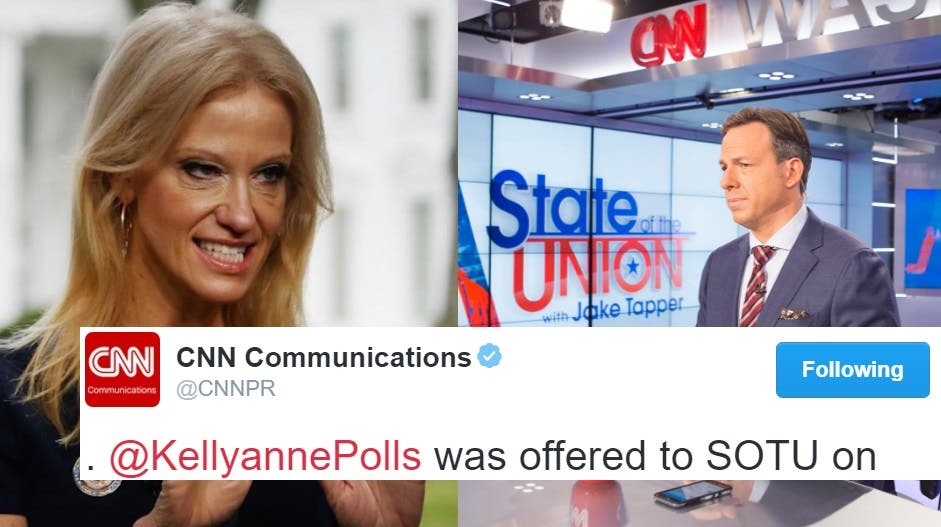 Two weeks ago it was revealed that a growing group of professional journalists who are calling for a news boycott of Kellyanne Conway, counselor to President Donald Trump. It appears mainstream outlets are now starting to heed those calls, and lyin’ Kellyanne is responding to the situation in her favorite way: by telling more lies.

After Vice President Mike Pence gave the network the cold shoulder, CNN rejected an offer to have Ms. Conway on Jake Tapper’s State of the Union broadcast Sunday morning. Ms. Conway introduced “alternative facts” about the president’s inauguration, invented a terrorist attack called the Bowling Green Massacre that never happened, and made up a Muslim ban that former president Barack Obama never imposed on Iraqis. Considering the events of late, CNN decided the president’s counselor wasn’t credible enough to make the cut for its Sunday news talk show.

Ms. Conway, upset that such facts leaked into the public eye Monday morning via The New York Times, took to Twitter to spin up a new batch.

False. I could do no live Sunday shows this week BC of family. Plus, I was invited onto CNN today & tomorrow. CNN Brass on those emails https://t.co/LVOUWIytLK

CNN, being CNN, just had to set the record straight. With facts. The real kind. The networks’ official Twitter response was, for lack of better words, devastating.

. @KellyannePolls was offered to SOTU on Sunday by the White House. We passed. Those are the facts.

Americans far and wide loved the tweet. It garnered nearly 13,000 likes and 5,000 retweets within five hours.

Yet Ms. Conway and the rest of the Trump White House appear unwilling to break into reality anytime soon. Mr. Trump spent much of the morning disputing poll numbers that show him as the most unpopular U.S. President in history at this point in his term. The war over “alternative” and “true” facts is likely to wage on in the foreseeable future, and it’s up to you, the public, to decide whether your so-called president and her chief advisor are credible enough to lead the nation for four years.