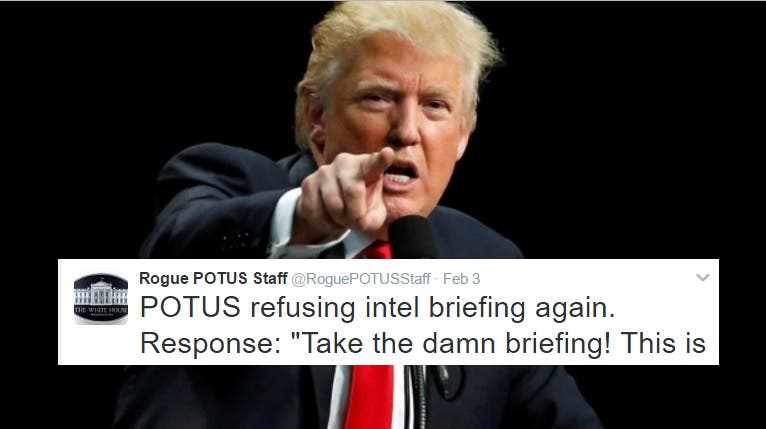 Resistance towards the Trump Administration has been growing across America as citizens react to his appalling executive orders and downright horrific cabinet appointments. But it seems that resistance has also appeared where one might least expect it: within Donald Trump’s White House staff.

For two weeks the Twitter handle @RoguePOTUSStaff has been tweeting fascinating little tidbits of information, supposedly originating from someone working inside the white house. The first Tweet on January 25th appeared to try and set the tone for what Trump’s presidency will be like:

Pres. Trump is already making waves at the office. Wants to be "the President who will be remembered as a King." His words, not ours.

To be clear: the account does not provide verifiable facts, but context on how events are occurring from the point of view of Trump’s inner circle, or at least someone surrounded by it. In its own words, the account seeks to “reveal the inner chaos and incompetence of President Trump’s White House.” The account also provides a smaller glimmer of hope that not everyone in Trump’s administration is as ideologically driven nor as incompetent as he is.

POTUS refusing intel briefing again. Response: "Take the damn briefing! This is why we screwed the pooch in Yemen!"

Real concern starting to emerge that POTUS not even acting as he believes best, just for spite. Ex: gutting EU data law because Obama.

The account also reveals quite a lot about the personalities of Trump and his administration off camera, for example, this tweet about Kellyanne Conway.

Kellyanne is a touchy one herself. Hides it better than POTUS, though. Those two, a match made in heaven.

But the account has also served a practical purpose. It has given an advanced warning about executive orders and how the President is handling his new job. Apparently, not so well:

Pres. Trump doesn't quite understand the difference between being POTUS and being a business owner. Keeps asking "who says I can't?"

Indeed, it seems the President really doesn’t like criticism, nor does he understand that he can be criticized. You’d think for a man who so passionately condemned President Obama’s policies he’d be more open to some political opposition.

The person behind the account has taken quite a big risk as their tweets seriously undermine Trump’s administration, displaying for all to see the unprofessionalism that goes on behind closed doors.

Bannon apparently hunting for heretics. Confirmed, is aware of this acct. Actively trying to identify us. #UnholyTrinity may be losing grip.

Here are some of the accounts best or most unbelievable tweets:

We can confirm that POTUS is encouraging people to buy his brands in order to have the "right look" to work for his administration.

"They're gonna report how we want, or they get no access. Let them come after me. Let them. We'll see what they do when their ratings drop."

POTUS says bad polls are "behind us" now because he's "taken care of it." Seems to be referring to his tweets from this morning.

Tensions raw around the West Wing. Possibility that POTUS family members may have actually voted twice at his urging.

For all those out there who want to stay up-to-date on the happenings of the Trump administration, this account is one you have to follow.