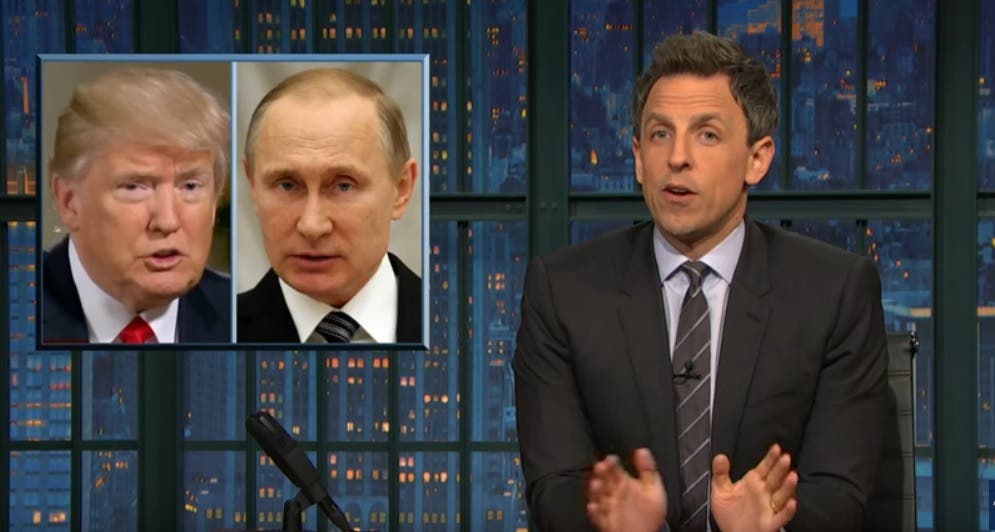 Late Night host and comedian Seth Meyers got deadly serious for a spell during last night’s episode. Delving into President Trump’s pre-Super Bowl interview with FOX News, Meyers tore into Trump for putting the United States on the same moral plane as Vladimir Putin’s Russia, which regularly murders journalists and commits horrific war crimes with impunity – even against his own citizens.

“Trump has staked the entire first two weeks of his presidency on the supposed desire to keep bad people from harming the United States. And yet, there are apparently some actually bad people that he’s totally fine with. Now, admitting that the U.S. has made mistakes would be fine, but that’s not what Trump is doing. Instead, it sounds like he’s defending Putin because he’s about to get caught for the exact same thing.”

Meyer’s terrifying assessment sounds more and more accurate with every passing day. Donald Trump’s ham-fisted attacks on the media and our independent judiciary seem to be laying the groundwork for punishing them when a terrorist attack does happen. His emulation and defense of Putin are even more disturbing once you consider the fact that Putin’s rise to power was enabled by a terrorist attack that is believed to have been perpetrated by the Russian secret service and publicly blamed on Chechen Muslims.

Meyer’s conclusion is one we all need to take to heart: “Pence and the GOP’s continued support for Trump shouldn’t be surprising, but this is still a troubling time for it. Because we need Congress to exert some scrutiny or oversight over this president, who is clearly bent on challenging, and perhaps eroding, the basic pillars of our democracy.” We cannot allow Republicans in Congress to stand in the way of