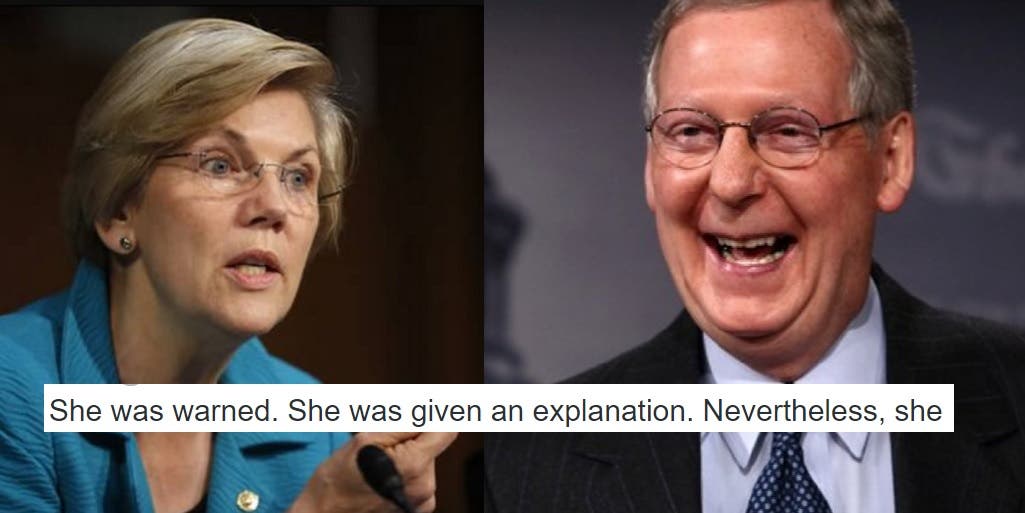 Guess What Trump Was Supposed To Be Doing When He Was Tweeting About Ivanka & Nordstrom?

Harvard professor turned Senator (D-Mass.), Elizabeth Warren is a well-established progressive icon. She has spent her career as a politician fighting for economic justice, civil rights for women and minorities, and environmentalism. Now Warren has become an overnight feminist symbol of resistance in the face of old crotchety white male opposition.

Yesterday, when Warren took the Senate floor to protest Senator Jeff Sessions’s (R-AL) appointment as Attorney General by Donald Trump, her opposition decided that they had had enough of her opinions.

Warren began to read a letter by the late Coretta Scott King, Martin Luther King Jr.’s wife, decrying Session’s appalling history of trampling on the civil rights of African-Americans. The letter was instrumental in blocking Sessions’ appointment as a federal judge in 1986. However, Senate Republicans swiftly intervened, claiming that Warren was violating an arcane rule against Senators impugning other Senators.

In other words, they claimed that it is against the rules for Warren to criticize Sessions during a hearing about whether or not Sessions is fit to be Attorney General. Warren was not only prevented from reading Coretta Scott King’s entire letter, she was banned from speaking for the rest of Sessions’ confirmation hearing.

Senate majority leader Mitch McConell explained, “She was warned. She was given an explanation. Nevertheless, she persisted.”

McConnell on Warren: “She was warned. She was given an explanation. Nevertheless, she persisted”

McConnell’s words have become a feminist rallying cry: “Nevertheless, she persisted!” Women across America are extolling Warren’s persistence in the face of male adversaries and recalling that she is embodying the perseverance of the feminists who made history.

She was warned. She was given an explanation. Nevertheless, #ShePersisted

Lesson to Mitch McConnell: If you try to put a lid on something, you just make it reverberate all the more. #ShePersisted #LetLizTalk

Did GOP leader realize when he said "nevertheless, #shepersisted" that I wouldn't be here today if I'd given up? #letlizspeak #ShePersists https://t.co/ns8nC953tZ

.@SenateGOP should have watched the #WomensMarch. Lots of women who have been told to "take their seat" aren't sitting anymore. #LetLizSpeak

"Nevertheless, she persisted." So must we all. You go, girl.

She resisted. #ShePersisted. She didn't give in. Silencing Elizabeth Warren won't work, because we are millions & millions! #ImWithHer

Ms. King's letter is getting more attention than if the GOP had let @elizabethforma read it. Do.Not.Silence.Women. #ShePersisted

Warren explained the dehumanizing effect of the Republican Senators’ actions. “I literally can’t be recognized on the floor of the Senate. I have become a nonperson during the discussion of Jeff Sessions.” This is compounded by the fact that two male Democratic senators were allowed to read the offending letter last night after Warren was silenced.

The fight is not over, but Warren’s resilience is inspiring; and in the age of social media, any attempts to silence a powerful woman only serve to amplify her voice across the globe.