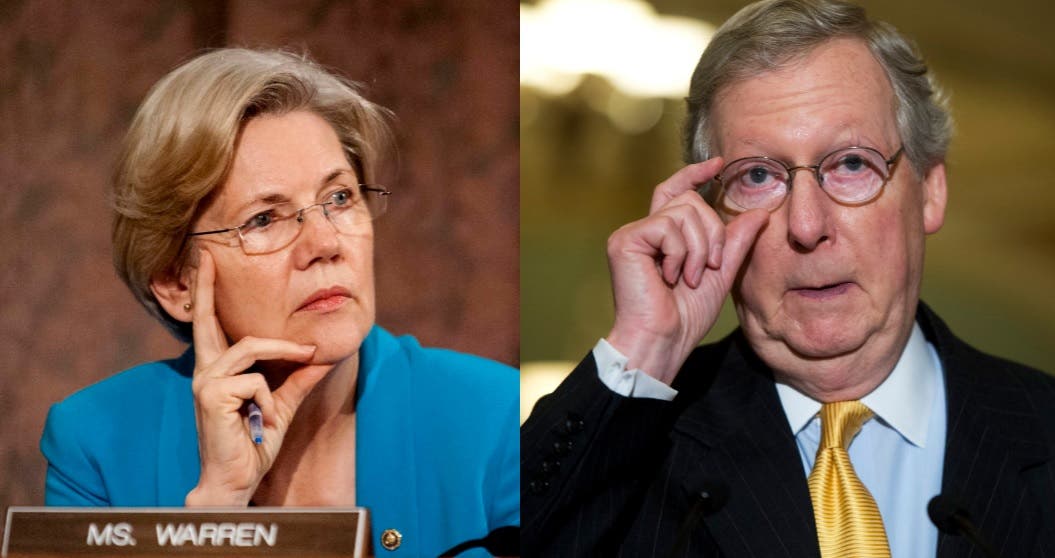 With One Tweet, Trump Just Used His Office To Help Ivanka’s Business

Yesterday, Senate Republicans formally silenced Elizabeth Warren after she read a 30-year-old letter written by Martin Luther King’s widow, Coretta Scott King, in which she passionately opposes the appointment of Jeff Sessions as a federal judge.

But the Republican attempt to stop the outspoken senator from revealing Sessions for the racist he is has blown up right in their faces.

After Republicans stopped Warren’s speech by arguing she violated arcane Senate rules against impugning another Senator, Warren immediately made a call-in appearance on Rachel Maddow’s MSNBC show to explain the situation further: “I was speaking about Jeff Sessions and, what I believe to be, his complete lack of qualification to be Attorney General of the United States…I’ve been red-carded on Senator Sessions. I’m out of the game on the Senate floor. I don’t get to speak at all.”

Warren then proceeded to stand on the other side of the Senate door and read out King’s letter on Facebook live anyway. Over a million people tuned in to watch her do it. By the next morning, it had 160,000 shares on Facebook and 7.3 million views. Copies of the letter have received hundreds of thousands of shares, and by morning-time tens of millions of Americans had read the letter Republicans did NOT want Americans to read.

What the Republicans have done is bring national media attention to what would have otherwise been another underreported partisan speech. Now the event has gone viral, the Republicans attracting fierce criticism from a nation furious at the idea that an old Southern white man is silencing a white woman reading the words of a black woman – whose words were so powerful that they denied Sessions a judgeship in 1986.

Their actions have galvanized the Democrats into opposition against their bullying tactics. Senator Patrick Leahy (D-Vermont) said “I never ever saw a time when a member of the Senate asked to out into the record a letter -especially by a civil rights icon – and somebody objected.” He was joined by Interim Chairman of the DNC Donna Brazile:

It’s a sad day in America when the words of Martin Luther King Jr.’s widow are not allowed on the floor of the United States Senate. Let Elizabeth Warren speak.

Dan Rather also had something to say on the matter. The seasoned journalist commented “Trying to silence speech can sometimes backfire on those seeking to suppress a message…You heard about [Warren’s silencing] I believe more because of what Senator McConnell did than Senator Warren’s message…In the days of yore, Mr. McConnell’ actions would probably not have gained traction. But in the world of Facebook Live – not so much.”

Warren also took to Twitter to convey her anger at this travesty – and she was joined by millions of others demanding that the old white men in the Senate #LetLizSpeak!

I will not be silent about a nominee for AG who has made derogatory & racist comments that have no place in our justice system.

I will not be silent while the Republicans rubber stamp an AG who will never stand up to the @POTUS when he breaks the law.

Tonight @SenateMajLdr silenced Mrs King's voice on the Sen floor – & millions who are afraid & appalled by what's happening in our country.

It is demeaning to the memory of Coretta Scott King and harmful to the process for the Republicans to silence @SenWarren. #LetLizSpeak

It’s unacceptable & inappropriate that @SenWarren was stopped from reading a letter by Coretta Scott King on the Senate floor #LetLizSpeak pic.twitter.com/etP0ZCQlAy

Just to be clear.. #SenateGOP sat a woman down and told her to be quiet because they didn’t like the truth she was speaking. #LetLizSpeak

The future is female and they really hate that. #LetLizSpeak

Afraid of the truth, GOP? #LetLizSpeak

#LetLizSpeak Imagine that, bunch of Republican men putting a woman in her place. We are going backward in time at every turn. #Resist

America, a country where free speech is almost considered holy, is slipping down the dangerous slope of authoritarianism. Elizabeth Warren’s silencing represents that first step towards the end of productive, bipartisan debate in this country. Even the Senate, a place where both sides of the debate have to be heard, are becoming increasingly Trump-like in their hostility towards well-meaning political opposition. If things keep going the way they are, soon only the judiciary will be in favor of upholding the First Amendment. But McConnell’s grandoise attempt to rudely dismiss the concerns of Warren has backfired in the best way – now the whole nation will hear her words.