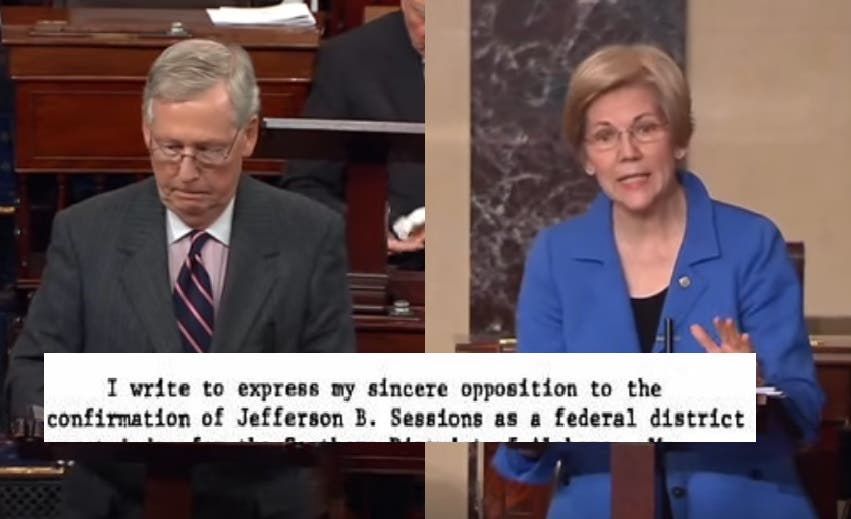 These Hilarious Photoshops Show Trump For Exactly Who He Is

Tonight, Senate Democrats are holding an all-night session to protest the confirmation of Sen. Jeff Sessions (R-AL), noted racist and religious extremist, for the position of U.S. Attorney General and the head of the Justice Department.

Sen. Elizabeth Warren (D-MASS) began her remarks by reading out a famous letter that had been sent to the Senate Judiciary Committee by Coretta Scott King, wife of civil rights hero Martin Luther King Jr, in opposition to Sessions’ consideration for a circuit judgeship.

Senate Majority Leader Mitch McConnell (R-KY), however, wasn’t having it, and ordered her to stop. Warren, astounded, said “Mr. President, I am surprised that the words of Coretta Scott King are not suitable for debate in the United States senate. I ask leave of the senate to continue my remarks.”

McConnell objected, and the Republicans voted to censure her – meaning she is no longer allowed to speak for the remainder of the session.

It is truly ironic that this letter was once read before the United States Senate before, in 1986, and was so convincing that a Republican-majority court voted not to approve Sessions for the judgeship because they were concerned about his racism.

Here is the letter that Mitch McConnell doesn’t want you to hear:

I write to express my sincere opposition to the confirmation of Jefferson B. Sessions as a federal disctrict court judge for the Southern District of Alabama. My professional and personal roots in Alabama are deep and lasting. Anyone who has used the power of his office as United States Attorney to intimidate and chill the free exercise of the ballot by citizens should not be elevated to our courts. Mr. Sessions has used the awesome powers of his offie in a shabby attempt to intimidate and frighten elderly black voters. For this reprehensible conduct, he should not be rewarded with a federal judgeship.

I regret that a long-standing commitment prevents me from appearing in person to testify against this nominee. However, I have attached a copy of my statement opposing Mr. Sessions confirmation and I request that my statement as well as this letter be made a party of the hearing record.

I do sincerely urge you to oppose the confirmation of Mr. Sessions.

Sessions’ long history of racism is well-documented. When presented with the documents for a civil rights case, he once threw the folder on the table and said he wished he “could decline all of them.” Former employees testify he regularly said racial slurs. Sessions once said the “Ku Klux Klan was O.K. until I found out they smoked marijuana.”

One African-American prosecutor testified that Mr. Sessions had called him ‘boy’ and said he “better watch how he spoke to white people.” Sessions said that the American Civil Liberties Union (ACLU) and the National Association for the Advancement of Colored People (NAACP) were “un-American” and “Communist” for trying to “force civil rights down everyone’s throats.”

Sessions called a white lawyer who defended black civil rights clients a “disgrace to his race” and was accused of committing voter intimidation when he tried to charge three civil rights workers with voter fraud for registering black voters.

Ted Kennedy remarked that “[It is] inconceivable … that a person of this attitude is qualified to be a U.S. attorney, let alone a United States federal judge … [He has] gross insensitivity to the questions of race.”

In a nation where the voting rights of blacks are under constant siege from Republican “voter ID laws,” where cops regularly gun down unarmed African-Americans without trial or charge, where minority communities are under attack from white supremacists, we cannot allow an unrepentant racist like Sessions to be the nation’s top lawyer.

For McConnell to censure Senator Warren over the reading of a document that has already been brought before Congress is the ultimate act of disgraceful partisanship. #LetLizSpeak is taking off on social media. Call your Senators, and tell them to vote NO on Jeff Sessions.

They can’t silence us all.

Stunning moment: Elizabeth Warren silenced by McConnell on the Senate floor for speaking out against Sessions' confirmation. pic.twitter.com/g3GBBOTEn9