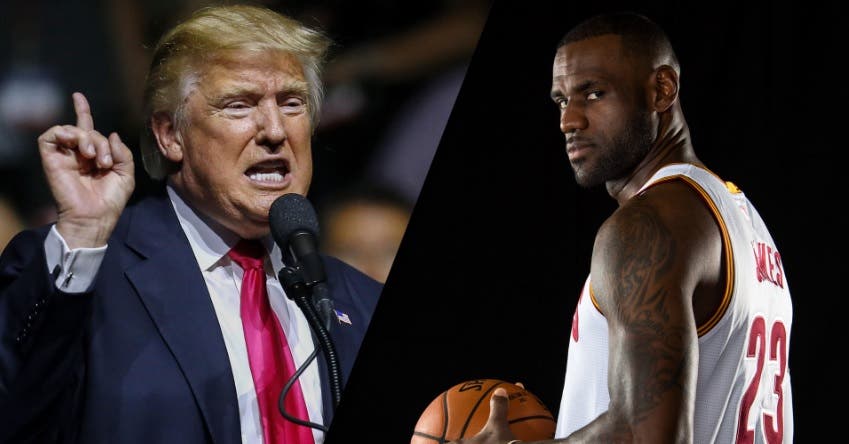 NBA Champion LeBron James just made a definitive statement against Donald Trump’s Muslim, standing up for American diversity and the right to peacefully protest discriminatory government policies that citizens do not support.

The Hollywood Reporter interviewed James, and he released his pre-recorded comments given at the NAACP’s Jackie Robinson Award ceremony, which will not be broadcast until this weekend.

The Cavaliers star made wide-ranging comments about the NBA’s attempts to fight gun violence and being outspoken on social issues while accepting the award:

“I am not in favor of this policy or any policy that divides and excludes people,” he says. “I stand with the many, many Americans who believe this does not represent what the United States is all about. And we should continue to speak out about it.” As protests continue to rage over President Trump’s ban on immigrants and refugees from seven predominantly Muslim countries, James has calibrated his message to encourage peaceful dissent through free speech.”

“Diversity is what makes this country so great. I stand with the many, many Americans who believe this does not represent what the United States is all about. We should all continue to speak up and fight for ideas that bring people together regardless of race, gender, ethnicity, religious beliefs or any other differences.”

James also spoke through the lens of his sensible businessman’s perspective on the benefit of international flows of people and business in the National Basketball Association, whose international presence, and player base has grown exponentially since he was drafted out of high school by the Cleveland Cavaliers in 2003. He’s right to encourage athletes to use the entertainment spotlight to speak out; after all, it worked for Donald Trump.

“The NBA is a global league; every team has at least one international player, with more than 35 countries represented and many Muslim-American players. And the league has been comparatively outspoken on social issues, initiating in December 2015 a campaign against gun violence. “It’s important that we as athletes continue to use the platform we have to speak up for what we believe in,” says James.

“We all have a voice,” said LeBron James, accepting the NAACP’s Jackie Robinson Award on Feb. 1, center court at the Cleveland Cavaliers’ Quicken Loans Arena. Wearing an NBA-branded Black History Month T-shirt, James, 32, recognized the sacrifices made by Robinson as well as pioneering black athletes Muhammad Ali and Jim Brown. “I’ve got a long way to go to have the kind of impact these great leaders have been able to have,” James tells THR. “I hope to continue building on the legacy they started.”

Speaking out directly against Donald Trump is a major step for LeBron James into the political arena, but it’s not his first time speaking out for civil rights. Five years ago, he began a path towards this moment, when he tweeted a Miami Heat team photo with all of the players who would go on to win his first NBA title wearing hoodies in honor of Trayvon Martin, the black teen who was profiled and killed by racist murderer George Zimmerman. In 2015, James became increasingly political within the NBA by taking a Vice President’s role within the league’s players union.

LeBron James’ change from King of the Court to court commentator on discriminatory government actions shows how far the widespread headaches, anger, and pain have reached. The Trump regime’s flurry of executive orders quickly spread across the globe and the consequences threaten to disrupt matters of public, private and business life for nearly every American as we wait for a federal appeals court decision on the ban.

America’s professional athletes have developed significant earning power over the course of the last three decades, and as a unified block could wield significant influence with the entertainment spotlight which they command, their Twitter accounts and for players like LeBron James, their business acumen.