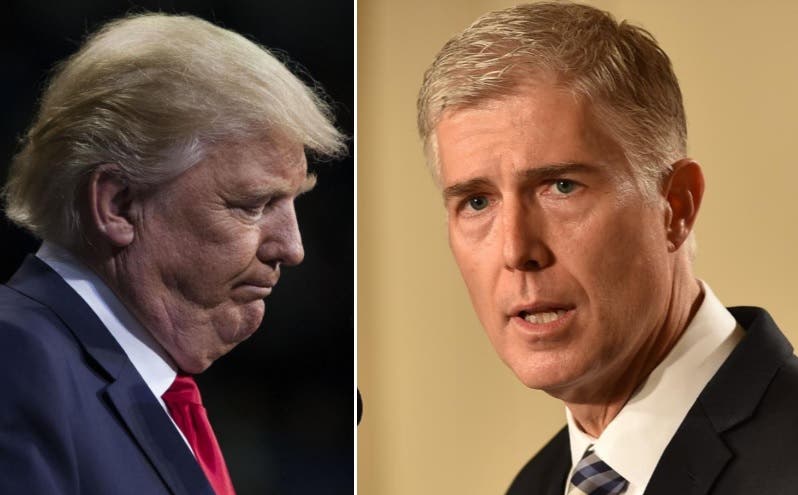 Serial narcissist and pathological liar Donald Trump just can’t seem to tell the truth to the American people. He’s already proven himself the lyingest candidate in history and has fabricated “alternative facts” about everything from terrorist attacks to crowd sizes. Ever the bombastic egomaniac, Trump simply seems physically incapable of handling even the most temperate criticism without exploding in a rage of personal attacks and flat-out lies.

The most recent example came early Thursday morning when Trump tweeted out an assault on Sen. Richard Blumenthal (D-CT) for having the nerve to report Supreme Court nominee Neil Gorsuch’s mild – and, it should be noted, well-warranted – criticism of the Tweeter in Chief.

In an interview with the Wall Street Journal in which he actually praised Gorsuch, Blumenthal reported that the nominee found Trump’s attacks on the judiciary to be “demoralizing and disheartening.”

Indeed, given Trump’s almost unprecedented rhetorical assault on the independence of the judiciary, which goes to the heart of our very democratic institutions, it would be hard to imagine any intelligent observer not being disheartened.

Sen.Richard Blumenthal, who never fought in Vietnam when he said for years he had (major lie),now misrepresents what Judge Gorsuch told him?

Trump, incapable of tolerating even the slightest criticism,  immediately fired back at Blumenthal Thursday morning, accusing him of misrepresenting the conversation with Gorsuch and launching into a tangent about the Senator’s Vietnam-era military service.

Lest it be forgotten, Donald Trump dodged the draft and compared putting himself at risk to STDs by having so much unprotected sex to fighting in Vietnam.

MORE: A spokesman for Judge Gorsuch says that the judge did express such sentiments to Sen. Blumenthal today. https://t.co/7sM90VHJXA

A spokesman for Gorsuch of course confirmed to NBC that Blumenthal’s account of the conversation was in fact accurate, and that Trump is lying about recorded remarks that his own Supreme Court nominee gave in criticism of Trump’s undemocratic and un-American attack on our independent judiciary.

As for the military service non-sequitur, it is true that Sen. Blumenthal has verged on misrepresenting his Vietnam-era military service, but that’s far better than can be said for the draft dodging Trump, who apparently got himself exempted with a string of bogus illnesses.

For those of us who are still tethered to reality, Trump’s constant lying is merely an unfortunate but almost amusing sideshow, something to shake our heads at. For millions of GOP voters across the country, however, the word of Trump and his administration has become sacrosanct.

No matter the evidence, these delusional and hate-filled conservatives will continue to believe whatever bile spews out of Trump’s mouth. This gives Trump an unprecedented ability to shape reality to his will and to actually create his own truth. An Orwellian idiocracy is truly being constructed on Pennsylvania Avenue, and if we don’t resist this erosion of the truth with everything we have, it will soon be too late.

But don’t let this paint Gorsuch as some kind of hero for doing his duty and not normalizing Trump’s outrageous lies. He’s still a hyperconservative Young Scalia and a threat to progress in America as we know it.