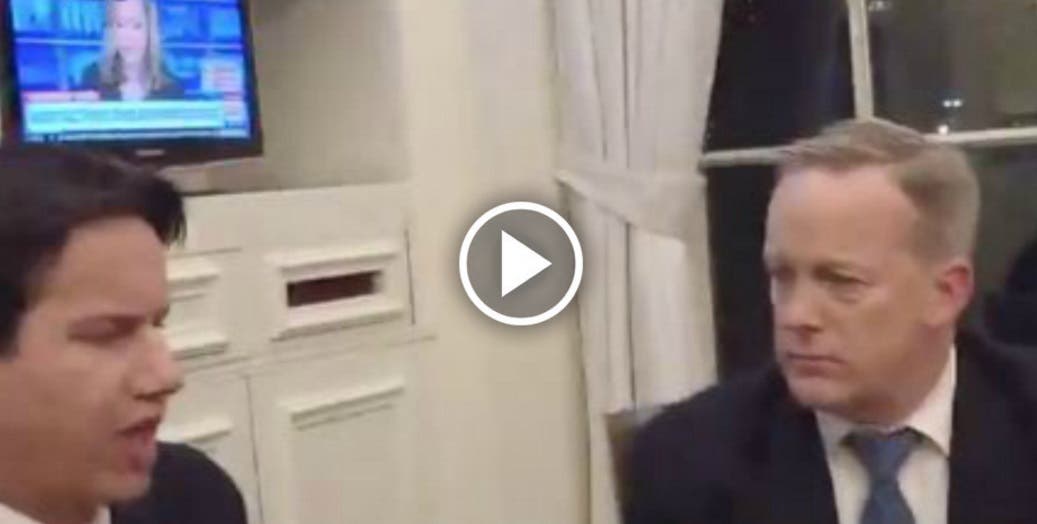 Breitbart is a fear-mongering website that has been a Donald Trump cheerleader since the campaign – perhaps because Breitbart’s former head, Steve Bannon, worked for the Trump campaign and now has a position of power in the White House. With Steve Bannon as Trump’s chief adviser, Breitbart’s loving coverage of Trump has been called ‘state media’ by its detractors.

The interview’s production was abysmal, beginning with the long seconds of dead time at the start, and continuing through awkward camera work that cut off half of Spicer’s face, and confused stammering by his Spiering. Spiering claims at one point that six countries were affected by Trump’s travel ban, when in fact seven were. In the background, you can see CNN playing a TVs – a broadcaster that Breitbart loves to vilify as the worst of the mainstream media because it has a tendency to make Trump (rightfully) look bad.

The brief two-and-a-half minute sit down interview that received a lot of hype pre-production is not even featured on Breitbart’s homepage. Rose O’Donnell’s Twitter has taken precedence over the awkward monstrosity of a production that the media outlet is clearly trying to suppress.

The only publicity that the interview has received is from journalists and media professionals savagely ridiculing it. Here are a few of their tweets:

i love this breitbart interview so much pic.twitter.com/n0bAAgoVYF

WHY ARE THEY DOING THIS pic.twitter.com/WM0wfD2k8u

Hey, I took the dead air from the beginning of Breitbart’s Facebook Live interview with Sean Spicer and looped it for a full minute. Enjoy! pic.twitter.com/aupMelOajG

Steve Bannon must not have been a very good movie producer if this is the production values for state propaganda. https://t.co/0O4FWuM7Lh

Come for the grade-school-level production values, stay for the the nauseous look on the reporter's face https://t.co/ygrxhqZoUZ

Breitbart remains a mildly influential Trump apologist and disseminator of hateful, xenophobic rhetoric, but this interview reveals one key thing: Breitbart is woefully unprofessional. Two middle schoolers with a webcam could have made a better video.

Watch a cut of the video here: