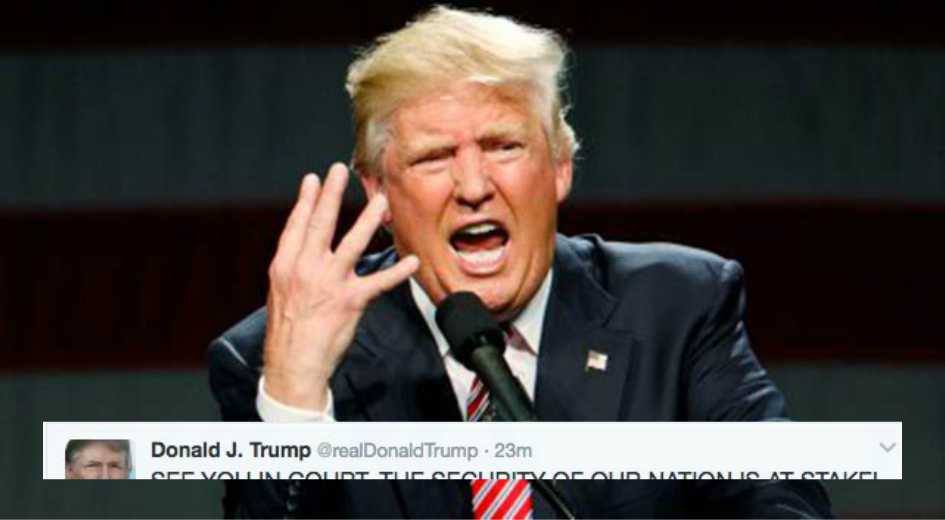 A federal court has just issued a decision to uphold the suspension of President Donald Trump’s ‘Muslim ban’ – a travel ban affecting citizen of seven majority-Muslim countries. Trump is outraged by the ruling and took to Twitter announcing that he will pursue the decision in court and blaming the justices for threatening national security. And, of course, he expressed his fury by holding down the caps-lock key with his tiny finger.

SEE YOU IN COURT, THE SECURITY OF OUR NATION IS AT STAKE!

The ban was announced as an executive order on January 27 and immediately went into effect, leaving thousands of visa holders and refugees stranded overseas; it has been denounced as inhumane and unconstitutional by groups including the American Civil Liberties Union.

The justices on the 9th Circuit Court of Appeals ruled that Trump’s travel ban violates the Constitutional right to due process of the would be travelers and immigrants who are affected by it. This ruling upholds a decision by federal judge in Seattle to halt the ban on February 3. In their decision the justices explained,

“Although courts owe considerable deference to the President’s policy determinations with respect to immigration and national security, it is beyond question that the federal judiciary retains the authority to adjudicate constitutional challenges to executive action.”

The ban was a vile expression of the xenophobia and fear mongering that Trump built his campaign on. He is trying everything he can to create a culture of hate in the highest levels of American government. Trump has already attacked the judiciary for upholding its Constitutional duty by suspending the disastrous travel ban – a move that cause his own Supreme Court nominee, Neil Gorsuch, to speak out against him.

Trump needs a basic lesson about the checks and balances in the U.S. government. His job is to keep Americans safe, and it is the courts’ job to make sure everything he does is Constitutional. If Trump can’t handle being a leader in a democracy and restrained by the rule of law, then he shouldn’t be in the White House. He seems to think that the American presidency can function as a dictatorship, but he will continue to be proven very wrong.