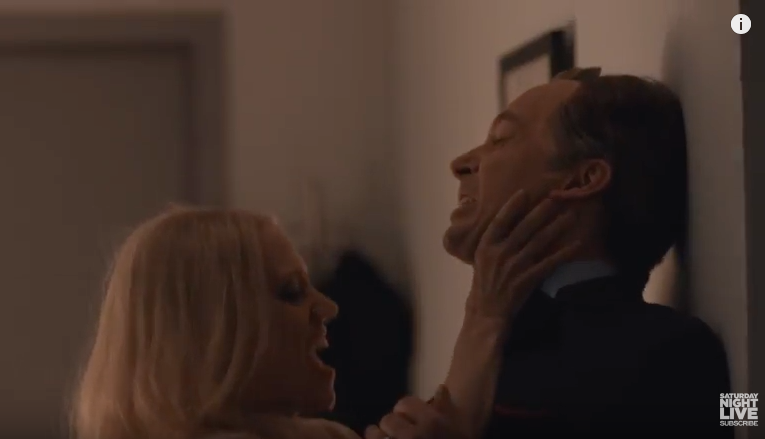 Saturday Night Live’s Kate McKinnon began her political satire career with her silly Hillary Clinton impersonation, but might’ve found her best role ever by spoofing Kellyanne Conway, Counselor to the President.  In their episode last night, McKinnon perfectly portrayed Conway’s desperate attempts to get onto the national media by spoofing the political operative as a parody of the movie Fatal Attraction.

In January, McKinnon’s prior parody of Trump’s Mistress of Propaganda played her as an attention hungry Roxy from the musical Chicago, who when accused of murdering her husband, took advantage of the press time to self-promote.

However, the innocent portrayal of Kellyanne Conway as merely an attention hound accused spousal murderer happened before she invented the totally fake “Bowling Green Massacre” last week on Meet the Press, during which she lambasted Chuck Todd and the media for not covering terrorism enough.

Surprise, surprise – the Trump regime’s ludicrous gaslighting idea of the week was the lack of terrorism coverage in the media. The Republican President chipped in some laughably ludicrous lies, and Press Secretary Sean Spicer bemoaned terror attacks in Atlanta three times until someone explained the facts to him, that the 1996 Olympics attack was actually committed by a white male seeking to advance a Republican, pro-life agenda.

So this week, after CNN’s rejection, Kellyanne Conway decided to make more headlines by violating federal ethics rules to promote Ivanka Trump’s failing clothing brand which retail stores are dumping daily. It was an effective way to get more attention but resulted in the Counselor to the White House getting counseled by the White House, and SNL made fun of that ironic mess hilariously as the desperate Conway begged and threatened the actor playing CNN’s Jake Tapper after breaking into his apartment.