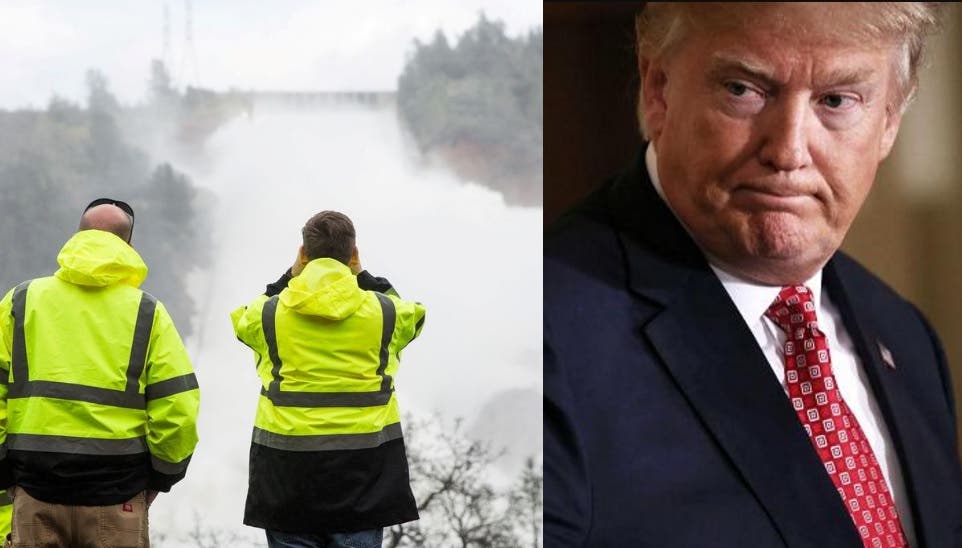 Nearly 200,000 people have been evacuated from northern California as the risk of catastrophic flooding looms. The Oroville Dam is almost full to capacity and its spillway, which diverts excess water to prevent overflows, is on the brink of collapsing. Governor Jerry Brown sent a request on February 10 to the White House, asking the Donald Trump Administration to issue a Presidential Major Disaster Declaration.

According to the Federal Emergency Management Agency (FEMA), “A major disaster declaration provides a wide range of federal assistance programs for individuals and public infrastructure, including funds for both emergency and permanent work.” It can only be issued when the disaster could overwhelm local and state capacities to respond.

While the White House has remained silent, refusing to approve FEMA aid for California, Brown deployed the California National Guard on February 12. There is still no word from the White House on whether they will do anything to prevent or manage the imminent disaster.

The funds were originally requested to help clean up the state after torrential rains caused $162 million in damages, but the impending disaster in Oroville adds a new level of urgency to the request.

Trump promptly responded to a similar request by Oregon in December.

This raises the question of whether Trump is deliberately targeting the people of California because he disagrees with the states progressive policies – most notably a commitment to protecting undocumented immigrants. Trump has already threatened to cut all of California’s federal funding if it votes to become a sanctuary state for undocumented immigrants. Trump has also suggested that he will give special attention to states that voted for him in the election. California did not.

Trump is vindictive and it is well within the realm of possibility that he would force Californians to suffer to make a point.

What has Trump been doing during these critical days while desperate Californians wait with bated breath? He did meet with Japanese Prime Minister Shinzo Abe. But he also spent $3 million of taxpayer money at Mar-A-Lago (his Florida golf resort) for the third consecutive weekend, insulted billionaire Mark Cuban on Twitter, tweeted about the Nordstrom feud that hurt his daughter Ivanka’s business interests, and played a couple rounds of golf.

In other words, Trump should have had plenty of time to approve disaster relief that would affect hundreds of thousands of Americans if he had his priorities straight. Trump values his ego, petty quarrels, and vacation streak above the concerns of the American public. When something inevitably goes wrong, he will be fully exposed as an incompetent fraud. Unfortunately, that revelation could come at the expense of 200,000 Californians and their livelihoods.