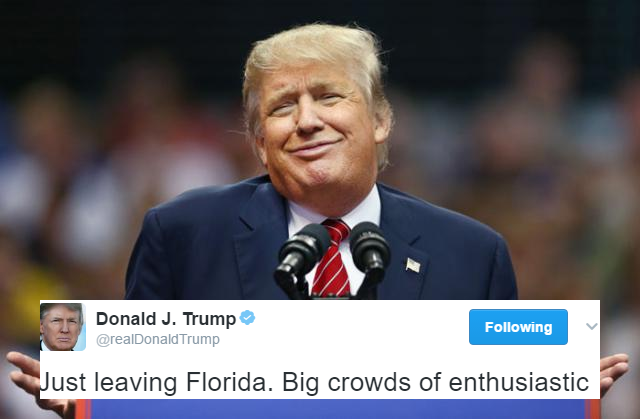 Trump Just Hired Cheerleaders For The Most Pathetic Reason Ever

Yesterday reports began coming in that at least 188,000 people living near the Oroville Dam in Northern California have been ordered to evacuate their homes. The dam is undamaged but its emergency spillway, which prevents water flooding over the top of the dam, is badly eroded and is getting worse. Communities living downstream from the dam could be affected by this potential disaster as recent heavy rains have filled Lake Oroville to the point it is nearly overflowing.

This situation has the potential to become the first disaster of President Donald Trump’s time in office, and one would imagine he is keen to see the crisis averted as soon as possible. The prolific tweeter could also use his platform to send some words of reassurance to the no doubt terrified families having to spend the night in temporary shelters while their homes and livelihoods are at risk of being overcome by torrents of water.

But no, Trump was tweeting about crowd sizes. Again.

It’s a known fact that the president doesn’t care for details. If he did, he’d have noticed that those crowds weren’t there to cheer him on, but the exact opposite. People were lining the streets in protest at Trump’s despicable agenda.

Here are the people lining the street as you left. You lied again, @realDonaldTrump pic.twitter.com/8MGLJM9xcP

Trump has spent the weekend with Japanese Prime Minister Shinzo Abe at his golf club Mar-A-Lago this weekend, where he has apparently spent his time fretting over his popularity. Meanwhile we can only imagine that Bannon is doing the real work turning the country into an authoritarian police state.

Anti-Trump protestors lined the streets as Trump was going back to Washington D.C. Trump’s priority was not dealing with their concerns, but rather projecting an image of himself as a glorious leaders to his  devotees across America.

One of the defining aspects of Trump’s leadership is his misguided set of priorities. He is obsessed with how he is portrayed in the media, which confirms everyone’s suspicions that he’s really just a showman and not the kind of person you want as president of the United States.