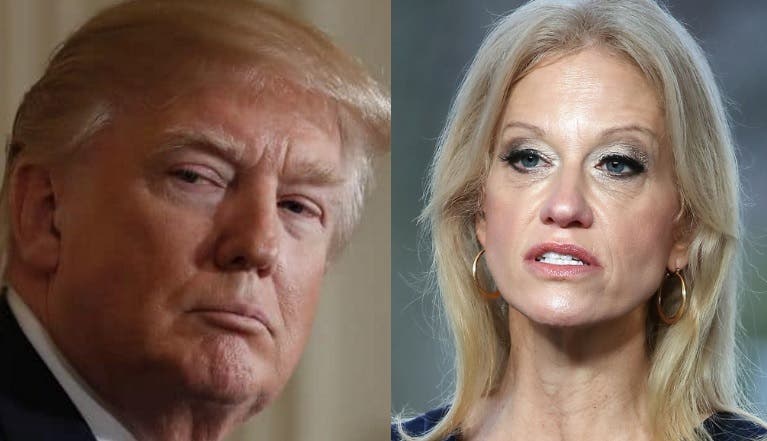 Trump’s top counsel Kellyanne Conway, the infamous preacher of alternative facts, has run up against a quite damning actual fact: she violated the government’s standards of conduct in using a White House press conference to promote Trump’s daughter Ivanka’s fashion line. And now Walter Schaub, the director of the Office of Government Ethics (OGE), has penned a letter calling for a White House investigation into her unethical behavior and for serious disciplinary action to be taken.

The House Oversight Committee’s chair and minority leader, Reps. Jason Chaffetz (R-UT) and Elijah Cummings (D-MD) respectively, already slammed Conway’s blatant ethical violation in an outraged letter to the OGE last week. Now, Schaub’s OGE has concluded that “there is strong indication to suggest that Mrs. Conway has violated the Standards of Conduct and that disciplinary action is warranted.” Her transformation of an official press conference into a TV advertisement for the family business, he found, constituted “a clear violation of the prohibition against misuse of position” for personal gain. In fact, the OGE’s regulations on misuse of power include almost this very scenario – a presidential appointee appearing in a commercial to promote a product – as an example of unethical behavior

The issue at question occurred on February 9th when Mrs. Conway held an official White House press interview with Fox News. Meant to discuss the inconsequential spat between Trump’s daughter Ivanka and retail giant Nordstrom, the press conference quickly descended into something straight out of QVC as Conway shamelessly promoted Ivanka’s clothing line. “Go buy Ivanka’s stuff is what I would tell you,” she said. “This is just a wonderful line. I own some of it. I’m going to give a free commercial here. Go buy it today everybody, you can find it online.”

Schaub’s letter was addressed Stefan C. Passantino, a deputy counsel to Mr. Trump and his designated ethics official, and called for an official White House investigation into Conway’s bald-faced abuse of power. Press Secretary Sean Spicer last week claimed that Conway had been “counseled” for her misdeeds. Unfortunately for the administration, however, a stern talking to doesn’t fit the bill as a punishment for violating ethics laws.

Instead, her clearly illegal and unethical behavior would easily be grounds for firing at the very least. Unfortunately, such ethics violations are handled by the employer’s agency, in this case the White House, and Trump’s administration has shown absolutely no inclination to investigate any of the legions of conflicts of interest – from the corporate elites cramming his cabinet to coordination with a hostile foreign government. Today’s letter, however, necessitates at least some investigation by the administration into Conway’s malfeasance, and if no serious action is taken we can be even more sure of the rancid corruption now infesting the White House.