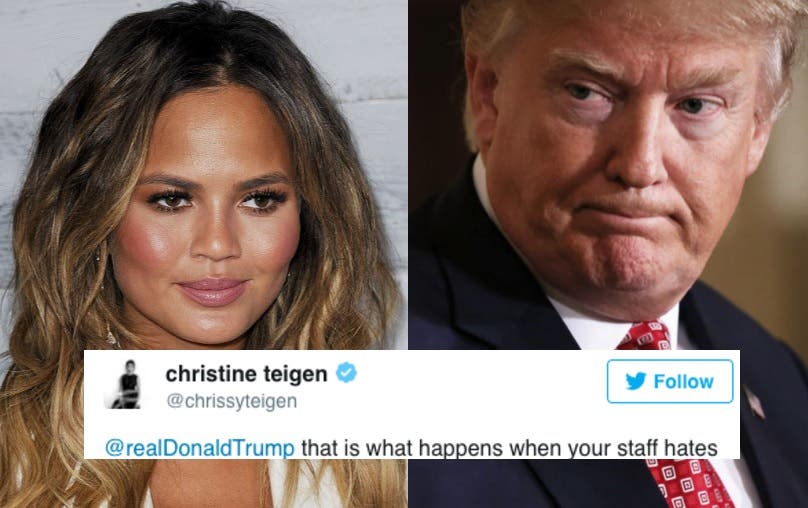 A Republican Just Tried To Tell CNN’s Cuomo To “Move On” From Flynn. Cuomo’s Response Is Perfect (VIDEO)

Chrissy Teigen mocked Trump’s whining on Twitter after Trump complained about his White House staff leaking information to the press. Trump is widely despised and many of his aides are desperate to let the public know the whole truth about Trump’s disastrous, inept, and lying Administration.

Teigen spoke the ultimate truth about the relationship between Trump and his staff by comparing him to Beyonce: Teigen then responded to a follower who tweeted, “God help the foolish soul who crosses Queen Bey!” Teigen makes an excellent point. If Trump were a likable person with reasonable policies his staff would be tightlipped. Unfortunately, he does not have any pleasant surprises up his sleeve like Beyonce’s albums, pregnancies, and love life. Members of the Trump team are refusing to remain loyal to a boss they know is on course to ruin America and is a generally narcissistic and unpleasant person.

Staffers are sounding the alarm in desperation by talking to the press before something terrible happens. They are not committed to Trump nor to his vision. If Trump wants that to change, he should start being more reasonable. He is quickly running out of cronies who can maintain a shred of credibility in front of the media. At this point, Trump is unlikely to change course and will continue to charge head on into a catastrophic future.