Trump began his remarks by reversing decades of American foreign policy and declaring that we can “live” with a one-state solution to the conflict between Israelis and Palestinians, giving a green light to the illegal Israeli occupation and condemning Palestinians to a future as second-class citizens in their own country.

He was then asked by a reporter about the growing anti-Semitic sentiment in the United States, and his answer was a national humiliation. 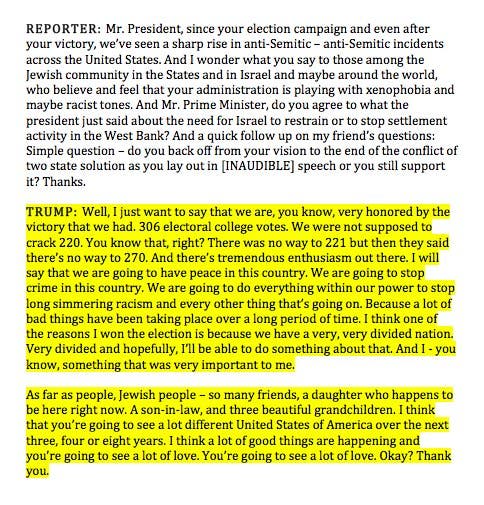 Once again, Donald Trump proves he is incapable of answering a question coherently and embarrasses himself and our nation before the world. He rambles on and on about his electoral college victory time and time again before launching into utter nonsense that fails to address the question – a fact which will certainly not be lost on all the neo-Nazis and anti-Semites watching online.

Anti-Semitic hate acts are skyrocketing around the nation. Jewish centers, schools, and synagogues have been receiving bomb threats by the dozens. Journalists regularly receive pictures of their children photoshopped in Nazi gas chambers from angry Trump fans. Synagogues have been smashed and swastikas spray-painted in public across the nation.

Trump’s pointed refusal to disavow anti-Semitism in America is utterly reprehensible – almost as much as Prime Minister Netanyahu’s attempt to spin Trump as being one of the “greatest defenders of the Jewish people.”

Netanyahu will cry “anti-Semitism” at activist boycott efforts to protect the rights of Palestinians but makes excuses for Trump, who has appointed an open anti-Semite to his cabinet and is supported by literal Nazis.

It’s clear that Netanyahu’s brand of far-right Zionism is just as much an ideologically vacant and unashamedly hypocritical cover-up for bigoted ethnoreligious agendas as American Republicanism.

It’s day 26, and we still haven’t gone one day without Trump being a national embarrassment.