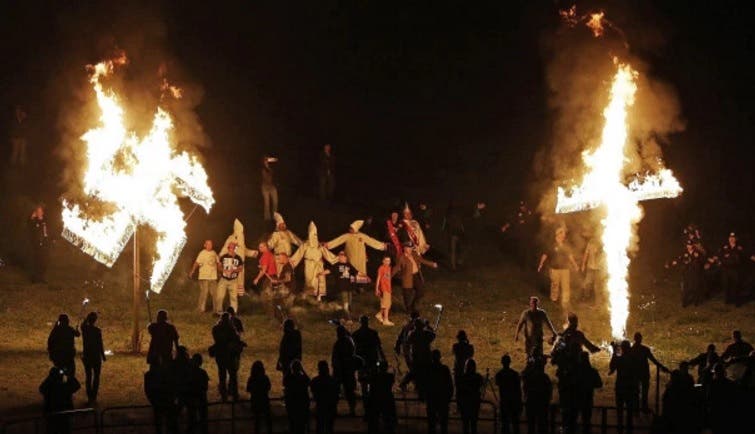 For the second year in a row, US-based hate groups have increased in size, thanks largely in part to Donald Trump’s candidacy for President of the United States, according to a new report by the Southern Poverty Law Center, the annual Intelligence Report.

Of all groups, however, SPLC found that anti-Muslim hate groups rose from 34 in 2014 to a staggering 101 last year. This rapid growth also coincides with an increase in violence against Muslims around the US as well.

Hate crimes against Muslims increased 67% in 2015 as Trump announced his candidacy and launched his anti-Muslim immigration campaign. 2016 is likely not going to fare much better. Only a mere hours after announcing his Muslim immigration ban a mosque in Victoria, Texas was burned to the ground.

Along with anti-Muslim groups, the so-called “Alt-Right,” a group of white nationalists rose to national fame as they endorsed Trump’s candidacy and upon Trump’s election had one of their own, Steve Bannon, hired into a White House staff position.

The SPLC report found that the number of hate groups operating in 2016 rose to 917 – up from 892 in 2015. While not the largest leap in recent history, as if is 101 short of the increase in 2011, it is still a staggering increase and speaks volumes to the climate Trump has created inside the US.

“2016 was an unprecedented year for hate,” said Mark Potok, senior fellow and editor of the Intelligence Report. “The country saw a resurgence of white nationalism that imperils the racial progress we’ve made, along with the rise of a president whose policies reflect the values of white nationalists. In Steve Bannon, these extremists think they finally have an ally who has the president’s ear.”

What makes the report even more horrifying is that it simply cannot account for the growing hatred about individuals who don’t even join these groups. While these groups continue to grow, it is reasonable to accept that hatred itself is growing as well.

That change in atmosphere around the country was immediately noticeable upon the election of Trump. In only the first 10 days after his election, the SPLC documented 867 bias-related incidents, including more than 300 that targeted immigrants or Muslims. This level of hate is also spilling into our schools.

According to SPLC, they questioned 10,000 educators, and 90 percent said, “the climate at their schools had been negatively affected by the campaign.”

With the rise of hate groups over the last two years, one group that saw a dramatic decrease in size were “patriot” groups. Groups that affiliated much with the Tea Party and others that formed out of hatred of President Obama and the fear of socialism.

These patriot groups saw a 38% decline, plummeting from 998 groups in 2015 to 623 last year. This same trend took place when George W. Bush took office as well. The patriot groups feel less necessary when their own are running the government.

One thing the report points out is certain. White nationalist and anti-Muslim organizations are feeling less afraid to come out of the woodwork and make their voices heard. This is unquestionably because Trump has emboldened them, given them a sense of legitimacy and his administration with the likes of white nationalists such as Bannon and the new Attorney General Jeff Sessions, only fuel that legitimacy.