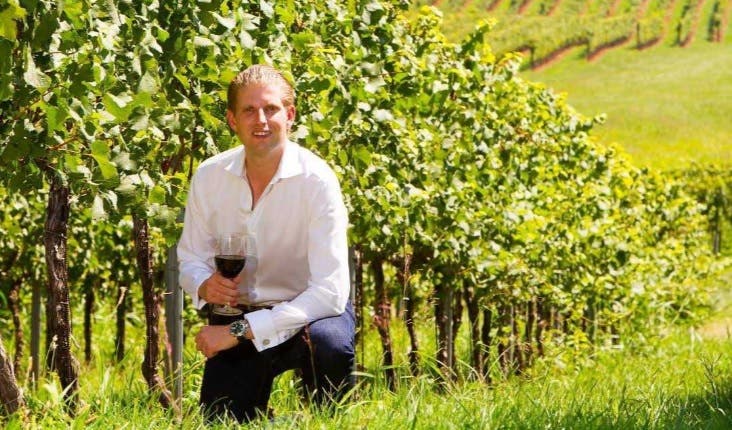 The President’s son Eric Trump filed a petition with the Department of Labor to hire 23 additional foreign guest workers to “take Americans’ jobs” at his Virginia winery. Eric Trump’s demand comes in addition to a December request for only six workers for the jobs which will pay $11.27 per hour, but that they claim that no American wants.

Eric Trump is seeking to hire workers beginning in April and keeping them employed all the way through October of this year. The petition was filed on February 9th, while his father’s Muslim ban was still being decided in the courts for discriminating against legal, visa holding immigrants. Buzzfeed reports:

The Trump Winery, also known as Trump Vineyard Estates, LLC, is asking to bring in 23 workers this spring to plant and harvest grapes. The workers are being sought under the federal H-2 visa program, which permits American employers to hire foreign laborers under temporary work visas as long as no qualified U.S. workers want the jobs. The job on the 1,300-acre estate could run through late October.

This isn’t even the first major controversy that Eric Trump’s winery – which his daddy gave to him – has faced this week. Business Insider reports that the #GrabYourWallet campaign is seeking to evict Trump wines from store shelves. Consumers are boycotting the grocery chain Wegmans just for carrying Trump’s brand of wine:

“I grew up with Wegmans as a Rochester local and have shopped there my whole life,” a shopper wrote in one of many recent one-star reviews on Wegmans’ Facebook page. “Please drop the Trump products in your Virginia stores so I can continue to be a Wegmans fangirl and update my review!”

Donald Trump’s hypocritical political position involves constantly advocating for American jobs on one hand and hiring as many foreign workers as the law allows on the other hand. Reportedly, Trump businesses employ a total 286 foreign workers in the family’s golf courses, restaurants, and hotels.

It’s only natural that Eric Trump has picked up his unstable father’s terrible habit of hiring foreign guest workers to save money on labor, rather than hiring workers from the good ol’ US of A.

It’s obvious that hypocrisy runs in the family.