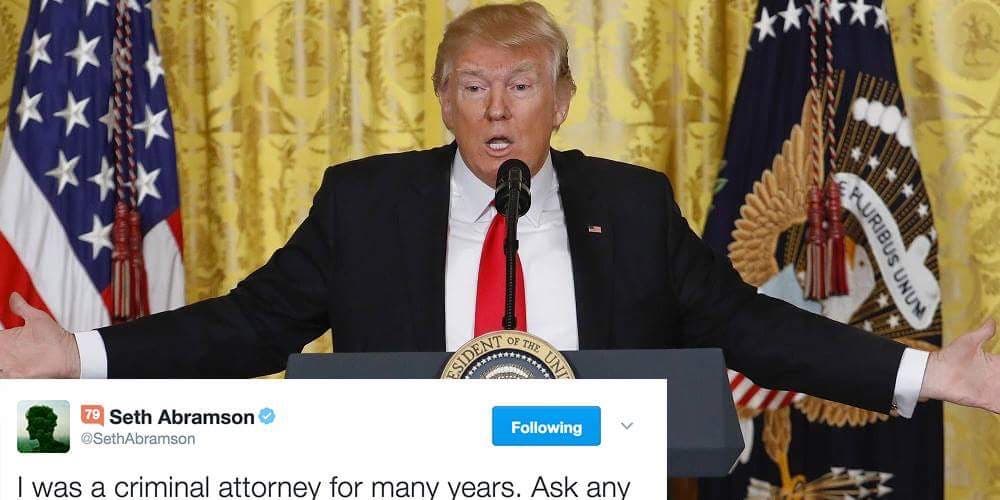 Donald Trump’s crooked Administration is less than a month old, and already it’s facing an existential crisis as multiple criminal investigations move forward, all capped off by the FBI meeting secretly with Congress last week to fashion a process to retain 100% of the White House’s electronic records.

One criminal defense lawyer realized after Donald Trump’s crazy press conference that America’s President is talking like some of the common crooks which he has represented. Not just like any suspect, but like those have ultimately pled guilty to a crime.

This is what Seth Abramson told me on the phone as we discussed his seven years of criminal law practice in both New Hampshire and Massachusetts:

“This is my experience talking with defendants. When defendants talk this way, and we go through the process, they tend to plead guilty. Over 90% of cases don’t go to trial, and people who talk this way are less likely to be someone who goes to trial.”

“I”m making an attempt to itemize signs of consciousness of guilt – which ordinarily is not something we a society should seek to do with our politicians – because those signs are not proof of guilt.”

It bears mention that Consciousness of Guilt isn’t a definite means of determining any legal case alone, but even law enforcement recognizes some behaviors that exhibit criminal forethought as giving probable cause to investigate if there’s a crime taking place.

With that said, Abramson listed what he considered the 12 signs of a guilty person might exhibit, all of which we can watch our new President do on national television at any given time.

2/ …allege a conspiracy against you. #2 Raise issues irrelevant to the case to distract attention. #3 Avoid speaking of the facts…

4/ …#5 Make oneself difficult to access for further questioning. #6 Displacing blame onto others. #7 Using anger/self-righteousness to…

6/ …of the case while (paradoxically) claiming innocence and having nothing to hide. #11 Manipulate surrogates (particularly witnesses)…

8/ …would make commission of the crime more likely. These are the 12 most common signs of a guilty person. Trump exhibits _all of them_.

Consciousness of Guilt is considered circumstantial evidence in a criminal court case and can be cited by the defense as a reason that someone was innocent or without knowledge of a crime.

In court, prosecutors often allege that a criminal defendant has Consciousness of Guilt as a way to introduce evidence that someone knows something, and juries are often allowed to weigh those acts in interpreting if someone has committed a crime.

The President has alternated between spending gobs of taxpayer cash on weekly vacations to his own properties and giving insane press conferences where he refuses to answer questions and insults the media instead.

Of his own accord, Trump rants and raves against the accusations of criminal activity and the numerous investigations which are haunting his young, but already flailing administation.

Those statements could later come back to haunt the Republican Administration and everyone involved in the potentially treasonous collusion with Russia.

“When a President acts like this and speaks like this, he deserves to be vigorously and publicly investigated on suspicion of criminal conduct by both Congress and law enforcement,” Abramson the criminal defense lawyer concluded.

“And if he is guilty, his words can and should be used against him.”