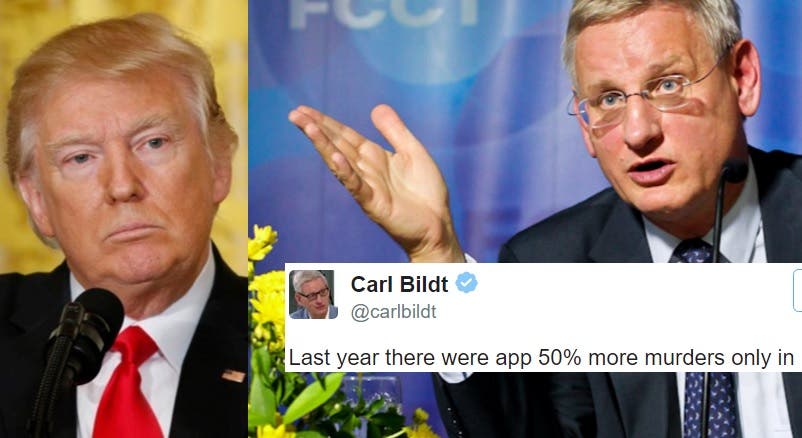 The former Prime Minister of Sweden, Carl Bildt, took to Twitter once again to roast Republican President Trump over the coals for inventing a fake terrorist attack in Sweden.

After doing a little bit of math, Bildt realized that there were more murders per year in Orange County, the county adjacent to where Trump was holding his self-appreciation rally in Melbourne, than there were in the entire country of Sweden.

Last year there were app 50% more murders only in Orlando/Orange in Florida, where Trump spoke the other day, than in all of Sweden. Bad.

In 2015, the entire nation of Sweden saw 90 homicides. Orange/Orlando County in Florida saw 50 within the first four months of 2016 alone. Brevard County, where Trump’s Melbourne rally was held, saw 24 murders in 2015. The state of Florida had 1,040 murders that year, while the entire United States saw 15,696 murders in 2015.

While Sweden obviously has a tiny population compared to the United States, it’s a very appropriate rebuke. Trump is relentlessly pushing this nightmarish fantasy world where criminal refugees and immigrants are creating chaos and violence that never happens., and it’s very unfair of him to drag Sweden into this.

Sweden’s refugee resettlement program has been extremely effective so far. Nearly a hundred thousand fleeing the ravages of the Syrian Civil War have found homes and opportunity in Sweden.

While right-wingers across the board inflate crime statistics and spin false narratives of mass refugee crime that is being hidden by the government, this is just more “fake news!”

Trump’s story came from pathological liar and noted misogynist Fox News host Tucker Carlson, who interviewed a filmmaker who claims that refugees in Sweden have led to a “surge in gun violence and rape.”

But the Chicago Tribune observes that “doesn’t align with actual crime statistics in Sweden, and the idea of a dramatic increase in rapes because of refugees has been debunked. Sweden does have a high rate of rape, but that is attributed to a broader legal definition of rape and a higher rate of reporting among women compared with other countries.”

We applaud the proud people of Sweden for standing up to Trump, calling him out on his outrageous lies, and for continuing to be a beacon of progress that the rest of the world should follow.