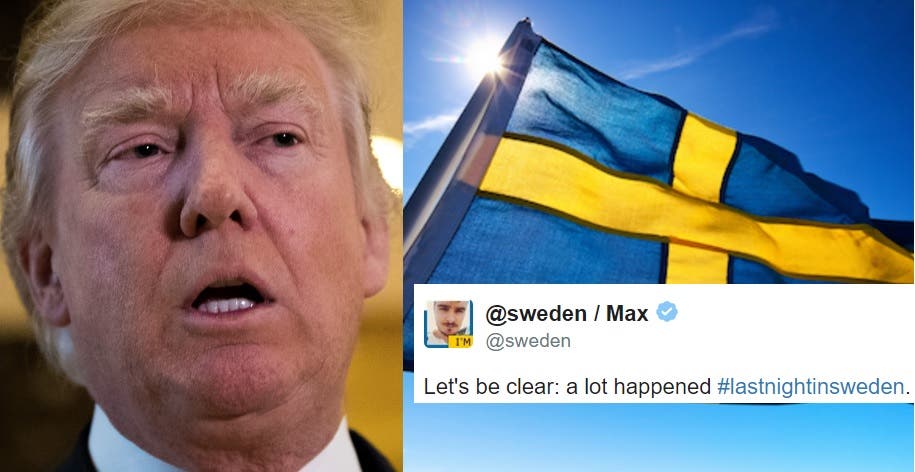 Trump Just Bragged About Himself At African-American Museum. Twitter’s Response Is Priceless

When Max Karlsson was chosen to run Sweden’s national Twitter account this week, he was hoping to post some photography. But yesterday he, had to use his considerable platform to defend his nation and to criticize President Donald Trump, who over the weekend made reference to a terror attack in the country while at a rally in Florida. The only problem was that this attack, like the Bowling Green Massacre, never happened.

Let's be clear: a lot happened #lastnightinsweden. Things happen all of the time. Just not the things @realdonaldtrump are spreading.

Karlsson wrote a series of “fact-check” tweets, many of them casting Sweden in a positive light.

We have around 100 murders per year. Thats like two days in the US. Two. Days.

Crime in Sweden has not increased over the last 20 years. On the contrary, Sweden is safer.

Sweden as a country is richer than ever.https://t.co/hUv7mNCoaJ

Some say we are still the best country in the world to live in…https://t.co/QCuQWzfwzf

For some of the users defending @realDonaldTrump, actual citizenship doesn't make you less of a "migrant".

… For them it's a derogatory term implying "not white". The logic is you'll never be Swedish if you're of color, regardless of citizenship

Trump later clarified his comments, saying he was referencing a Fox News report on immigration in Sweden – as if that was supposed to be reassuring. Sweden is the latest country that Trump has offended, and the list is growing larger every week. Soon there won’t be many nations left that haven’t been the target of one of Trump’s unhinged rants.

But the real story here is that Trump is lying to the American people in order to pave the way for his anti-Muslim policies. A constant stream of rhetoric about the negative impact of immigration from Muslim countries, regardless of whether it’s false, subconsciously shifts individuals’ window of acceptable speech towards the right.

The right-wing’s obsessions with “legality” and nationality are nothing but the hoods of a white supremacist agenda. A person cannot be “illegal.” Borders are artificial lines drawn on a map and nationality is a bourgeois concept used to foster competition and solidify the control of ruling elites. The idea that you are a suddenly bestowed with the blessing of nationality in a particular nation due to the geographic location of your mother’s uterus when you are born is laughable.

If Trump succeeds in turning red America against Islam, then Trump’s apparent agenda of ethnic cleansing will be more acceptable to middle America because he and his fake news allies have conditioned them to believe that Muslims only bring trouble, and America would be better off without them. We cannot allow Trump and his cronies to trample over the values that made this country great to begin with.